Art to make you shiver: ghostly visions appear in Cobh

Passport photos of women who left Cork for the US are the basis for a new show in Sirius, while Brian O'Doherty's murals might reemerge from their hiding place on the gallery's walls 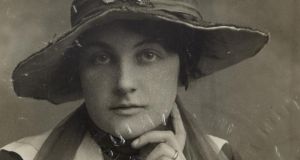 If gallery walls could talk, they would tell stories of portraits, landscapes, absorbing visions, poised sculptures and paintings that refuse to sit straight. They would also speak of shrinking: becoming microscopically smaller with every layer of fresh white emulsion and Polyfilla. At the Sirius Arts Centre in Cobh, they’d also insist: “One, Here, Now”. That’s because 20 years ago, one of Ireland’s most important international artists, Brian O’Doherty, spent a residency at Sirius painting the walls with huge murals in his renowned abstract style, based on the ancient Celtic language of Ogham.

The murals were on view for two years, before being covered up with lining paper and then, ever so slowly, more or less forgotten under layers of paint. Picture rails around the top of the beautiful centre gallery at the Sirius show how, initially, curators took care not to mark the walls, but over the years, as personnel came and went, memories inevitably faded.

When Miranda Driscoll took over as director at the end of 2014, their presence came as a total surprise. “I was at an opening, and [the artist] David Farrell said: ‘Do you know what’s behind the walls?’,” she recalls with a wry smile. “Once I’d heard about them I couldn’t shake the thought. It was lovely, astonishing. I looked at the place completely differently.”

Once she began to research, Driscoll found plenty of material. There were letters between O’Doherty and Peter Murray of the Crawford Gallery, where O’Doherty, then working under the name Patrick Ireland, was also installing a piece. There was a file on the visit of then president Mary Robinson to the opening. A cache of photographs taken on the night show the murals in all their colourful glory.

Driscoll is one of those people who sees something that needs doing, and gets it done. After graduating from IADT and Falmouth in Cornwall, she, together with Feargal Ward, founded the Joinery in Stoneybatter, Dublin. “It all happened a bit by accident,” she says. “When you leave art college, you’re still looking for support from your peers, so we took the building as a production place, and there was a gallery attached. I’d had no intention of setting up a gallery or running a venue.”

The Joinery closed because of funding, “or lack of”, as Driscoll puts it. “We got burned out. I was lecturing in photography, working as a photographer, and running workshops to make ends meet.”

She brings me on a tour of the Sirius, named for the first steamship to cross the Atlantic, from Cobh to New York in 1838. It is housed in what was once the Royal Cork Yacht Club. It was designed by Anthony Salvin, who otherwise seems to have specialised in grand houses for English aristocracy. It’s an Italianate pavilion, which is charming from the street, but if you’re lucky enough to approach by boat, you can see how it would have wowed yacht club members.

“The place I ran in Dublin couldn’t be further from this,” she says. “Both aesthetically and in terms of where it is; but I grew up near Bray, and it feels a bit like that – this very proud heritage both places share. Cobh isn’t on the way anywhere. It’s a one-way road, so people have to make a point to get here, but that also means there’s a great focus on looking out. Cobh has a really deep and quite traumatic history: the rescue for the Lusitania was led from here, the Titanic left from here, it was a British fort . . . ”

Cobh was the location for some of the thousands of American naval servicemen who came to Ireland in 1917 to take part in the first World War. Many of them married Irish women. Cobh, then Queenstown, was the setting for a huge number of weddings, and subsequent passport applications on behalf of the new brides. Historian and archaeologist Damian Shiels has uncovered these, frequently elaborate passport photographs, and an exhibition of them is now on at Sirius.

Cobh’s direct connection to America, coupled with the Sirius’s innovative residency programme, has attracted a significant roster of artists. Driscoll remembers New York-based curator Jessamyn Fiore (who had previously run the Thisisnotashop space in Dublin) looking from the balcony at Sirius to the pier her grandmother had once stood on to leave for the US. “It’s a romantic thing in that sense,” she says. James Turrell had the first residency in 1994, and other international alumni include Byron Kim, Jim Sanborn, Doug Dubois and, of course, Brian O’Doherty.

Driscoll shows me a photograph taken of the exterior of the Sirius, after dark, in 1996, in which you can see O’Doherty’s murals glowing like jewels through the windows. Then she shows me another, taken more recently, of the lining paper peeled back to reveal the letter “A”, the almost-ghostly evidence of the wonderful paintings that lie behind. Driscoll recalls that she shivered when she saw it first. “It feels like a really incongruous thing. A taste of important minimalist conceptual art from New York, in Sirius Art Centre.”

The most beautiful place

When O’Doherty left Ireland for the US in 1956, he departed from Cobh, on his way to take up a scholarship to Harvard. He made friendships on that boat “that lasted for years”, he recalls. But when he eventually returned to Ireland, he was determined to do something to mark the sense, both of presence and departure. “In all my career, the gallery at Sirius is the most beautiful space I’ve ever seen,” he says. “Because of the light, it shimmers, it’s transcendental. And I decided to make a monument: to the Irish language, and to origins, and to ogham.”

He has the highest praise for Peter Murray, who “made the whole thing happen. He even had one of the walls replastered to give a better surface, and re-presented it to me like a great invitation. It’s a happy work. It involves my ancestral DNA, but it also includes the story of the hundreds of thousands of people who left from Cobh on those awful ships.”

According to Driscoll, the Sirius mural is “one of only two permanent O’Doherty wall drawings still in existence”. The other set is at the wonderful Casa Dipinta in Umbria, Italy. O’Doherty has spoken of seeking a secret language, a code to underpin his artwork, and discovering it in Ogham – the ancient Celtic language that was always written, or carved, never spoken aloud. Formed by a series of lines and slashes, and exploded into colourful geometric adventures, O’Doherty spells out the words: One, Here, Now on the walls of Sirius. Writing at the time, the critic Alexander Alberro describes how the murals “take on the status of a memorial to those who were forced to leave Ireland, as well as an act of resistance against the legacy of what has been described as the ‘age of empire’ ”.

As living memory becomes history, it’s a crucial time for save and restore the work.

The Sirius mission, says O’Driscoll, is to “demonstrate the value of the arts in a daily context in Cobh, without losing the rigour that could be seen in a more city-centre-based institution; someone said to me you can’t have both, but I think you can”. As well as running the centre, she is now fundraising to bring the O’Doherty murals back to their initial glory, and relaunch them with a programme of artistic, literary and music events (one third of her target has already been pledged).

She flicks through a well-thumbed large grey notebook, all her contacts and leads, thoughts and ideas for the project. “I really feel like it’s under our noses. I don’t think convincing people it’s worth doing is the problem. Still,” she concludes, “we can’t do it if we don’t raise the money. It’s a real leap of faith.”

The Movie Quiz: What was the last Marvel epic to show in cinemas?

The most audacious – and entirely bonkers – TV in recent entertainment history

The Movie Quiz: What was the last Marvel epic to show in cinemas?