Women have traditionally fared poorly in the profession – but are things changing? 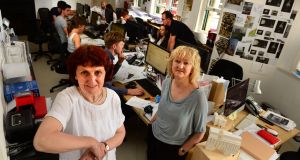 Shelly McNamara and Yvonne Farrell, of Grafton Architects: their appointment as curators of next year’s Venice Biennale of architecture feels like a major step. Photograph: Dara Mac Dónaill 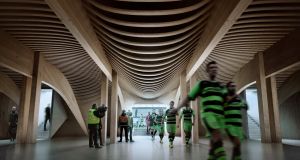 A CGI of the proposed stadium for English club Forest Green Rovers by Zaha Hadid Architects. The late Zaha said: “If I was a man, do you think I would be called a diva? No – they would just talk about the architecture.” Photograph: Zaha Hadid Architects/Handout via Reuters

“The ghosts of modern architecture.” That memorable phrase is how architectural historian Beatriz Colomina describes women’s status in the profession. “Everywhere present, crucial, but strangely invisible.”

In the UK, women make up over half of university admissions to architecture courses but only a quarter of registered architects. Something is wrong.

In 2012 the Architect’s Journal decided to go some way towards ending the invisibility of women in the profession by supporting an award for women’s achievement in architecture. The Jane Drew Prize is named after a prominent British modernist architect who died in 1996, after many years of distinguished practice with her husband Maxwell Fry.

The winner of this year’s prize is the 85-year-old Philadelphia-based Denise Scott Brown. Although Scott Brown may not have been exactly invisible through her long career, the award begins to right a wrong committed when her husband, Robert Venturi, was awarded architecture’s biggest prize, the Pritzker, in 1991, and Scott Brown was left out, despite their having built their careers together.

Scott Brown’s omission from the Pritzker was addressed in a 2013 petition (eventually garnering 20,000 signatures) to have her equally honoured. The Pritzker committee declined. Was she bitter? “No, no,” she says. “The petition was my reward, that was my Pritzker. We don’t need another award ceremony, I just want joint creativity recognised.”

Such prejudices are still common, however. Architecture is a tough world: the hours are long, the pay for all but the most eminent is poor, and women are still held back in a culture obsessed with macho ideas of the maverick genius defined by Ayn Rand in her 1943 novel The Fountainhead. This aggressively male vision of architecture has, arguably, held women back for generations.

Last year the death of Zaha Hadid robbed the system of its most visible and most powerful woman. Hadid had become successful by making herself more forceful, more characterful, more aggressive than her male counterparts. In 2007, Hadid said to me, “If I was a man, do you think I would be called a diva? No – they would just talk about the architecture.”

There is speculation about how architecture might be different if it was designed by women, just as there is perennial discussion about how big business might benefit from more women at the top, but such debates tend towards the simplistic. “I’m uncomfortable with the subject of being a woman architect,” says Madrid-based Indian-born architect Anupama Kundoo. “Being an architect is enough of a struggle anyway without worrying about being a woman.

“What are the capacities and capabilities we need to be an architect?” she asks rhetorically. “Do we need men’s genitals? Can’t men be sensitive too? These discussions about men producing phallic towers and Zaha designing a stadium [for the Tokyo Olympics] like a vagina are very condescending to both sexes.”

Likewise the concept of a prize for women strikes some as problematic. British architect Sarah Wigglesworth, for example, tells me she is “a bit critical” of such awards. “It sets [women] up in competition, and that’s exactly the problem – the same old, same old,” she says.

Wigglesworth, Scott Brown and Colomina all agree about the importance of recognising collaboration. “A building,” says Scott Brown, “might involve several thousand people in its construction. How can you credit just one?”

Colomina concurs. “Architecture is fundamentally different from art, it is a collaborative practice. We need to think of it more like film and in the movies everyone is credited.”

She delves back into history for architecture’s ghosts. [Charles Rennie] Mackintosh used to say it was his wife, Margaret Macdonald, who was the real genius, yet history only remembers Mackintosh. Lily Reich, with Mies van der Rohe, Charlotte Perriand with Le Corbusier – they’ve disappeared. The star system, this idea of the genius figure, has been holding women back.”

What is seen as the individualistic expression of genius in a man is, as Hadid found, seen as aggression if it is perpetrated by a woman. “It’s uncomfortable,” says Wigglesworth. “Women need to fight their corner, but if they do, they risk being seen as harpies. People are still scared of feminism but they don’t see it for what it is, which is a tool for understanding what’s going on.

“We still don’t talk about this enough,” she continues, “and it’s shocking, for instance, how even supposedly progressive architects still don’t understand the importance of a flexible working culture. This isn’t an issue about women, it’s about the quality of life for everybody.”

But pure, unadulterated sexism has played its part. “In academe,” Scott Brown says, “I would say something and one of the men would say ‘I think what Denise really means is . . . ’ and then he’d say what he thought. Or Bob would be invited to an event and I’d be invited to the “ladies’ luncheon”.

“At first I saw an advantage in being a woman, it was unusual and more visible. But then I realised this was what they call a ‘slave mentality’.”

There are, however, real reasons for optimism. The appointment of Dublin-based Grafton Architects (founded by two women, Yvonne Farrell and Shelley McNamara) as the curators of next year’s Venice Biennale of architecture feels like a major step.

Chicago’s second architecture biennale (2018) is being led by a mixed male and female team, California-based Johnston Marklee, and the architecture section of this year’s Royal Academy summer exhibition will be curated by Farshid Moussavi.

There is also increasing recognition for female architects. Liz Diller of Diller, Scofidio + Renfro has propelled the practice into a position as one of the world’s leading builders of cultural blockbusters; Jeanne Gang is on the verge of becoming a starchitect; and New York-based Annabelle Selldorf is the most in-demand gallery architect in the US.

Japan’s Kazuyo Sejima won the Pritzker Prize and directed a Venice Biennale. There is also a new generation of partnerships in practice and in life, including SelgasCano, Pezo von Ellrichshausen, Dow Jones and others.

In 1989, Scott Brown wrote: “The heroically original modern architectural revolutionary with his avant-garde technology, out to save the masses through mass production, is a macho image if ever there was one. It sits strangely on the middle-aged reactionaries who bear its mantle today. A more conserving and nurturing (female?) outlook is being recommended to the profession by urban planners and ecologists, in the name of social justice and to save the planet. Women may yet ride in on this trend.”

That nurturing environment now confronts a resurgent atmosphere of “locker room” rhetoric. Yet to my surprise, Scott Brown asks, “Did you see the pussy hats?” She is referring to anti-Trump protestors’ handcrafted headwear. “There is real change,” she adds.

The struggle continues. As Wigglesworth says, “The suffragettes didn’t achieve what they did by knitting.”