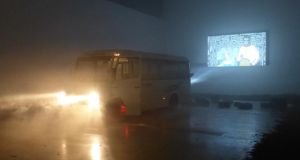 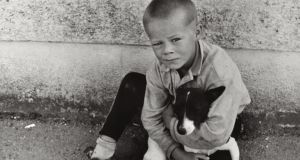 Boy with Puppy by Gypsy Ray 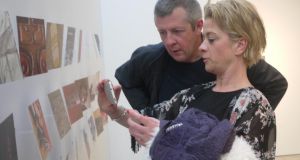 Bedwyr Williams has been described as a cross between a stand-up comic and an installation artist. There’s a touch of Mad Max to his Echt, the centrepiece summer exhibition at Visual. Day becomes night as you enter the arena of the main gallery through a broken security fence, on a carpet of pine bark. A parked bus (courtesy of M&A Coaches) looms out of swirling mist, luggage spilled around it. A film is projected from its open rear door.

In scenes of carnivalesque excess, Williams imagines a singular dystopian future. Things have broken down, and people amuse themselves in the tattered remains of consumer culture, fetishising and parodying its rites and rituals. They indulge in fads and party like crazy, delighting in conspicuous consumption. Williams and his fellow performers go at it with ferocious energy and commitment. You may or may not notice that the deranged, unhinged vision they create is an only slightly exaggerated version of real life.

A critique of a culture shaped by aimless diversions and the play of market forces is balanced by an admiration for anarchic creativity. Rather than being passive consumers, Williams implies, people should take control of their own worlds.

Not every gallery could accommodate a bus, but Visual takes it in its stride. In fact, apart from this whopper of an installation, it comfortably fits a big group show, the Éigse Open Submission, and the first instalment of Post-Electric, a season of shows exploring the growing overlap between physical and digital worlds.

Carlow’s 36th annual open exhibition is now the AIB Éigse exhibition, with a €5,000 prize from the sponsor. It went to the accomplished realist painter Blaise Smith. Tate Liverpool director Lewis Biggs selected the show and, apart altogether from the five invited artists (Eilís O’Connell, Kathy Prendergast, Willie Doherty, Siobhán Hapaska and Micky Donnelly), the range and quality are impressive. And it’s good to see the return of TJ Maher. After establishing himself as one of the best young painters around, Maher disappeared from the scene about 20 years ago. He was getting on with other things but about three years ago he felt that he wanted to paint again. His three mixed- media paintings – shimmering surfaces, layers of blue – evoke feelings of energy and containment.

There is quite a lot of painting on view, and sculpture – that is, sculpture within the conventional sense of the term: cast, carved, modelled, assembled or collected three-dimensional objects. In their differing, equally compelling ways, Katie Watchorn, Olivia O’Mahony, Ursula Burke, Louise Concannon, Rachel Joynt, Robert Frazier and Eileen MacDonagh exemplify the elasticity of that concept. Jim Savage, Geraldine O’Reilly and Dorothy Smith make the case for drawing as an art form in its own right.

Photography emerges as a strong strand, as employed by Simon McDermott in his double portrait of a couple in their home; Mandy O’Neill’s portrait,Cait; Úna Spain’s atmospheric The Ward; and Jeanette Lowe’s swimmers. And there are exceptional screen-based pieces, including Susan MacWilliam’s exploration of our fascination with the paranormal, and Kevin Gaffney’s eloquent meditation on divided lands, made in Korea.

Under the Post-Electric umbrella, a group of Carlow IT design students have made an excellent research project and exhibition, Exchange (AR). It started with them hitting the streets and asking people for their views on Visual. They found that people related more comfortably to the theatre and were wary of modern art, not feeling interested or confident enough to engage with it. The responses led to a consideration of how connections might be made with the potential audience. The material is beautifully presented and richly informative.

In the concluding part of the project, a number of people were invited to contribute a work of art of their own for exhibition. A grid of reproductions of their pieces fills one wall. The “Augmented Reality” bit comes if you download the app Blippar to your smartphone, “blip” any of the works and access a wealth of background material. From start to finish, it’s a fascinating project. Its June 4th launch coincided with Faultlines a conference on Irish design research, and a new design journal, Iterations. Until September 13th, visualcarlow.ie

Artist, photographer and teacher Gypsy Ray was born in Illinois, and has worked extensively in the US. She has also spent time in Ireland from the 1980s and, since 2000, has lived in rural Co Kilkenny. In an era of digital technology, when photographic images have never been so easy, numerous and throwaway, Ray’s work is something of a corrective, making a case for the considered image, whether achieved with a camera or through drawing.

Ray’s black-and-white portrait photographs are exceptional for her evident empathy. Simply put, she responds incredibly warmly to people. Her subjects include many individuals you might or might not recognise, artists and writers such as Adrienne Rich, Dervla Murphy, William Rubel, Alan Counihan and Patrick O’Connor. There are also people we are unlikely to know at all but quickly feel that we do. Ray gives her subjects a chance to be themselves, and generally they respond well to that, be they children, young students at San Francisco Middle School or workers in the midst of their labour.

The all-plastic Holga box camera was launched in the early 1980s. Its limitations – including blurred edges and uneven lighting effects – have endeared it to many photographers, including Ray. She employs it for landscapes. Some are included in the show and gathered in the publication The Poetry of Place, with a text by Butler director Anna O’Sullivan. The photographs are dreamy, muted and as O’Sullivan observes mostly offer us “passageways into nature”. Metaphorically rich, they offer us a series of thresholds, leaving us poised on the edge. The edge of what? Of the realm of the unconscious, perhaps; the unknown, the infinite. Until June 21st, butlergallery.com