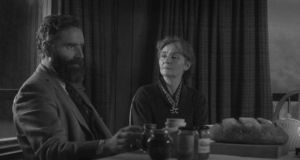 Heroes and blood sacrifice: Roger Casement as envisioned in Alan Phelan’s Our Kind

Having never been a fan of parades or raking up the past, I was worried in the early weeks of 2016. I wondered if the anniversary programming of Ireland’s galleries and institutions might send us back in time, in more ways than one.

If the cultural narrative of 1916 is to be believed, this might not be such a bad thing. As echoed by Declan Kiberd in RTÉ’s recent documentary A Terrible Beauty, the new nation was founded on the work of poets, playwrights and artists. Imagine if they had such sway today.

However, as with all remembering, mythologising is going on. Both A Terrible Beauty and Camille O’Sullivan’s Fire in the Blood foray into the work of Harry Clarke (also on RTÉ) fudged the connections that so many Irish artists and writers of the time had with England.

The inescapable nature of mythology is at the heart of Sabina Mac Mahon’s So Through the Singing Land He Passed, at the Lab in Dublin until June 11th. Mac Mahon shows the work of five artists made in response to Maimie Campbell, whose Death of Cuchulainn was rejected for the National Gallery of Ireland’s commemorative exhibition in 1966.

So far so good, except that every single piece in the show, from Campbell’s “original” painting, with its early modernist echoes of Mainie Jellett, to Conor Dowling’s photographic series The Exact Spot Where Patrick Pearse Surrendered, has been invented. None of the artists exists, but their fantasy works are all too plausible.

This reaching back, yearning for a past that never existed in order to plunder it for contemporary meaning, is nothing new. The British Museum’s excellent Celts exhibition demonstrates how “Celtic” is a cultural label rather than an ethnic identity: it was originally used by the ancient Greeks to describe barbarian outsiders.

Mac Mahon’s show is part of a strong 2016 programme at the Lab, which kicked off with Bridget O’Gorman’s evocative In the Flesh. Exploring the idea of preservation, O’Gorman showed a conservator at the National Museum lovingly tending a gun while musing on the secret lives of the objects we archive.

After all, unless an artist is in the business of reinventing the past from scratch, it is the objects in our collections, what we have chosen to collect and preserve, that form the basis for future historical narratives.

“Celtic” may be a cultural construct, but it’s still hard to argue against heroes and blood sacrifice. Or is it? Over at the Hugh Lane, Alan Phelan’s Our Kind (until October 2nd) looks at what Roger Casement’s life might have been like had he not been executed in 1916. Broken by the publication of the “black diaries”, which detail his homosexual experiences and (perhaps) fantasies, Phelan’s Casement is in Norway, eking out a half-life in exile. The new Republic is kinder to its martyrs than its living citizens.

Citizenhood, and our places within the State, form another contemporary conundrum. In the memorial discussions with groups representing the families of the soldiers and signatories, I am struck by the thought that attaching greater importance to the ideas and desires of someone simply on the basis of what their ancestor may have done is closer to an aristocratic ideal than it is to a republican one.

Overall, the exhibitions that have pandered to historical cliches are the ones that have stumbled and are somewhat anachronistic. There is a sense that since the 50th anniversary Ireland has moved on in ways that couldn’t have been anticipated. Both the Sense of Ireland festival, held in London in 1980, and L’Imaginaire Irlandais, in Paris in 1996, were hugely invested in taking the temperature of how others saw us. The works selected were positioned to show the world what Irishness looked like.

Twenty years on, the cultural programming in Ireland’s galleries is much more focused on what it means to be a citizen in today’s connected world.

At Project the Spanish artist Núria Güell’s recent Troika Fiscal Disobedience Consultancy encouraged a different kind of rebellion by establishing an agency to enable “ordinary” people to avail of corporate tax-avoidance systems. In Güell’s thesis agreed social norms can be as oppressive as imperial and colonial control. Her example of Crickhowell, the “fair tax town” in Wales, where small traders came together to establish their own offshore tax shelters, is brilliant.

They are thinking even further ahead at the Lewis Glucksman Gallery, in Cork. For 2116 (until July 3rd) 16 Irish artists explore how the future might look. It’s an eclectic mix, tinged, as its curator, Chris Clarke, says, with “uncertainty, vagueness and the inevitability of failure”. This makes perfect sense, because no matter how we see the artists and poets of 1916, any of their certainties would have naturally been tempered by doubt.

From the exhibitions of the first quarter of this centenary year Ireland has a bright and exciting cultural future. We just have to get the weekend’s parades out of the way. Artists reflect the world and play a part in shaping it, although the latter role is usually only amplified with hindsight.