Around the world in 80 aspics: cracking through history’s veneer

The past informs cities like Paris. But visitors must also embrace the enlightenment of now 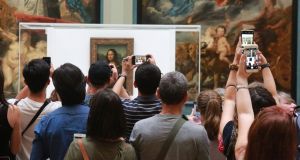 Visitors take photos of the Mona Lisa in the Medici Gallery at the Louvre in Paris: Museums are magnificent but do not let them cage culture. Photograph: Owen Franken/New York Times

The gourmet shops of Paris. Their windows boast delicacies coated in a transparent gelatin called aspic. It preserves the foodstuff inside. Like a sheet of glass or a display cabinet for the butterfly collector. Magnificent but pinned, mounted and dead: cities get trapped in aspic. A certain mentality makes of them living museums. Urban centres whose peaks are hammered back into the documented and imagined past.

All summer, the world has been on the move. Pragmatics of hot weather, closed schools and commercial lulls propel people towards travel. Transport modes scorch across regions in blissful ignorance of geopolitics and political economy. Hegemony, multipolarity, ancient history? No thanks, best not to exceed your strict baggage allowance. Cheap flights and sturdy infrastructure connect nodal points all over Europe. From Dublin, you can draw a vector to pretty much any main city you want and quickly find a flight that will describe that trajectory. Off you go to capitals, resorts, rural mountain retreats. You walk in the footsteps of the great explorers; you gasp the same air as dead tubercular poets; you ape the ancient limping pilgrims; you hole up in a city and soak up its sights.

Cities have long evolved from primary trade into secondary functions as attractions. We bumble through the honey of these different beehives. London, Rome, Madrid, Paris, wherever – all draw swarms of tourists with must-see checklists. There are splendid marvels: the towers, arches, parks, museums, artworks and markets. The street corners, benches, bars and restaurants. But keep an eye out for the aspic: the weary Left Bank; the ghosts of existentialism; Byron; Dublin burdened with Joyce. Proust does not permeate Paris. Remembrance of things past. Chez Swann? Nah. It’s not that highbrow past is not important, it just must not be overplayed. The age of enlightenment is always now.

Museums are magnificent but do not let them cage culture. Cities are alive. They are not monuments. The visitor must resist the mentality of the mausoleum. The 17th, 18th, 19th century? Graveyards of prescribed glories? Père Lachaise? Are you really in mourning? In the late 1990s, in a Menilmontant back-street bar, edgy, wrecked, laughing youths drank 10-franc beer and rolled funny cigarettes. The cheap sign outside was a navy disc surrounded by yellow stars. Welcome to Eurobar, the best-named dive in Paris. Time took it and dispersed its clientele. But what is the acceptable time frame for aspic?

We move as global things. We touch down and take off. We populate the air. We are passport holders. Places populate our memories. We make maps. We twist cartography. A city is a topography of delight in which we may fool ourselves we are not tourists but have taken up temporary residency. Beware guide-book archeology. Reject the version of the city only linked to the ancient Euphemisms who founded it under the history-book reign of King Rex. Ditch travel writing that assails you with vague BC archeology or talk of a golden age whose repetitive blur only blinds you to any sense of that city’s vibrancy. Streets and bridges are named after writers, militarists and engineers – dead achievers do deserve to inhabit a city’s mythic ether. But ration the past: the spirit of the age is now.

On Madrid’s calle del Pez, the Palentino barman always reminded me of Kinski. A ramshackle haven at whose counter I have nursed drinks at least yearly since 2001. In May, I found the place had been gutted, refitted and cosmeticised for a more upmarket clientele. The barman had passed on, absorbed into a city’s fertile memory. In there like the shaky Berber restauranteur off place de la Reunion in Paris’s 20th. My instinct does not hesitate to mummify both.

The great elements of every city die. And that city mutates and prevails. But it is best to free cities from the weight of centuries. Create your own camino. Map out your own modern mythology. Mark your own milestones. View the world and the places you visit and live in as a continuum of collapsing puppetry. It is all eroding. Move on forward, not into the archived past. Do not choke on ancient aspic.