Arminta Wallace’s 2015: Adrift in a sea of multicoloured gloop 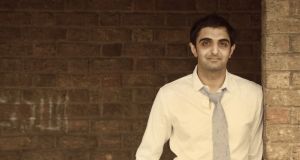 Sunjeev Sahota, author of The Year Of The Runaways, one of six books that shortlisted for the Man Booker Prize 2015.

We live in a world of white noise. Actually, not so white. Headlines are the blood red of terror attacks; social media is an explosion of fluorescent yellow; emails emit a tiny but constant drizzle of pale blue pings.

To be a cognitive creature in the 21st century is to swim in a sea of multicoloured gloop, some of it hilarious, much of it distressing, all of it slicing and dicing your concentration. And still books and films and live performances cut through the chatter. How do they do it?

July 18th, 2015. West Cork Literary Festival. In a marquee on Whiddy Island Cormac James is reading from his novel The Surfacing, set on a boat trapped in Arctic ice. Outside the wind gets up and the tent’s steel frame begins to creak and groan. Suddenly we’re all in that boat, entranced, uneasy, on edge. Unique.

August 8th, 2015. At St Canice’s Cathedral, Chamber Choir Ireland and Camerata Kilkenny perform Bach’s B Minor Mass as part of Eternal Harmony, the Bach strand at Kilkenny Arts Festival. It’s a tough work, but under the baton of Paul Hilliard, Bach’s music soars, bringing us from the depths of despair to the very gates of heaven.

So if you take yourself to a cleverly programmed festival in a gorgeous place, you’re guaranteed a memorable artistic experience. Well, maybe. We’ve all been to festivals where the magic doesn’t happen.

Plus, my 2015 playlist has far more pedestrian origins: nudges from friends and colleagues; podcasts heard over the clatter of the Dart on the way to work; the tottering pile that is the to-read list.

So here’s what I’ve learned: there are no guarantees and no short cuts. The old joke has it that if you want to get to Carnegie Hall, you gotta practise. In this noisy world you gotta stop and pay attention – or you’ll miss all the best stuff.

Sunjeev Sahota’s The Year of the Runaways: Beautiful, big-hearted novel about Indian migrants in Sheffield.

Robert Forster’s Songs to Play: The Go-Betweens veteran provides songs to sing at the top of your voice on the road.

Ireland’s Wild River: The Mighty Shannon: This Crossing the Line film was TV documentary as poetry. And it didn’t paddle away from climate change, either.

Off Track: In this ABC podcast, from November 7th, scientists and acousticians from the Australian Antarctic Division go in search of the endangered blue whale. You’ll never hear anything like it.

River: Okay, the dead people in this BBC drama were annoying. But it was saved by Abi Morgan’s classy dialogue, the startlingly accurate portrayal of grief (that scene where a suicidal Stellan Skarsgard bangs his head against the drinks machine, and a can of Dr Pepper rolls out – remember?), the mad, joyful finale. All this, and Bishop Brennan too. Genius.