Anarchy and the art of survival 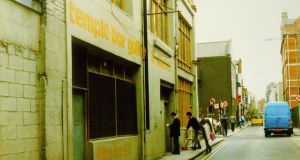 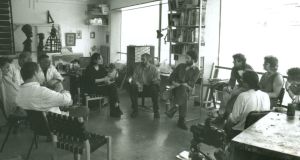 Early years: a discussion in Robert Armstrong’s studio in the mid 1990s

Temple Bar Gallery and Studios, which is 30 this year, was not the first artists’ studio co-operative in Dublin, but it is certainly one of the best known and most historically significant. When it sparked to life, in the summer of 1983, its founder, Jenny Haughton, who had just returned to Dublin from New York, remained remarkably calm while working frenetically to tie its strands and personalities together. Her preternatural confidence enabled her to create an impression of economic viability and strategic coherence. All of this took place in the midst of chaos and the virtual absence of money – a contribution from her mother made it possible to set up the company.

Haughton’s confidence stemmed from the fact that she had a vivid vision of what TBG&S should be. Without denigrating the more professional, specialised form it has gradually assumed, the centre was initially much more diverse in its aims. A sense of utopian possibility was inherent in the belief that a multitude of disciplines, from food to film and theatre, graphic design to fine art, could support each other and flourish under the same alternative roof.

In a way, conventional aesthetics has eventually caught up with the heady thinking of that moment. Look at the Workers Café, for example, which was recently part of TBG&S’s birthday celebrations. It transformed the gallery into “a pop up café and social space for discussion, learning, sharing skills and food”. But really the cafe was quite a formalised event, one instalment of a multivenue project marking the centenary of the 1913 Lockout. The anarchic diversity of the 1980s has been corralled into what is now, nominally at least, a licensed cultural playpen, the Temple Bar “cultural quarter”.

Back in 1983 the establishment of TBG&S was possible because CIÉ had earmarked the area for development as a vast bus garage. People were drawn to the neglected, run-down buildings by short-lease, low-rent tenancies. Haughton’s plan was more ambitious than most in that she took on a dauntingly large space, a disused shirt factory. By the time CIE abandoned its plans, Temple Bar had acquired its cultural reputation, and when Temple Bar Properties was created, in 1991, the district’s emergent cultural profile was integral to the rejuvenation strategy.

Still, it would be a mistake to think that the survival of TBG&S was assured. With so many creative temperaments concentrated in one space, tensions were inevitable, and there have been tensions and disagreements. It’s perhaps surprising that the whole thing didn’t implode early on. Against the odds, it has been exceptionally resilient. As Haughton observes, though she has long moved on, its “original legal structure remains in place”.

Crucially, as an organisation it has shown a certain political shrewdness from the beginning. As well as artists, its board has consistently incorporated outside expertise, including legal and financial advice. The solicitor Linda Scales, for example, is credited with devising the 1994 Cultural Use Agreement that fundamentally safeguarded artistic occupancy in the heart of Dublin, no mean feat given the commercial pressures that would certainly have arisen through the intervening years.

Years of upheaval
The early 1990s were years of upheaval as the Temple Bar precinct was dramatically overhauled; then Ruairí Ó Cuiv had a nerve-racking time overseeing the radical transformation of TBG&S, which reopened in its present incarnation towards the end of 1994. As director, he had to deal with the myriad, often conflicting imperatives and expectations of a sometimes fractious membership, Temple Bar Properties, the Arts Council and more.

Working in a tightly restricted site, McCullough Mulvin architects brilliantly reinvented the building (which stepped slightly outside its original footprint in the process) without compromising the character of the setting. The revamp left some 30 studio spaces (down from 32 but vastly improved) of varying sizes, a ground-floor gallery with conspicuous street frontage, a bright, airy atrium, offices and storage. The scale, proportions and versatility of the design still impress.

The studio spaces are highly prized among artists, but they are not free, as is often assumed. A fair-rent clause ensures relative affordability. That founder members had an indefinite right to studio occupancy generated – and still generates – heated debate. Slightly fewer than a third of the studios are so occupied today, and the majority opinion seems to be that there is a virtue in maintaining some continuity. Temporary occupancy lasts three or four years. Listening to artists, there may well be a case for looking at five-year occupancy. Different artists have always had different relationships with their studios, and five years is not a long time in the life of an artistic project.

The gallery is the public face of TBG&S – very public, given that its shop-front window looks directly on to Temple Bar. “The window is interesting,” Claire Power, TBG&S’s current director, says. “Our approach is that artists can use it or not, as they choose. We’re quite amenable to blocking it completely. But some artists and curators are very keen to use it.”

Power, her programme curator, Rayne Booth, and Anne Kelly, who looks after accounts and development, make up the core staff. It’s a challenging but, they insist, stimulating time. “We’re trying to be ambitious,” as Booth says, “within the limitations, obviously, but really ambitious.”

So rather than say, “We can’t do that, because we don’t have the funding,” they try to find funding, or find creative ways of working around shortfalls. They point to Mason Hayes and Curran’s support for the 30th-anniversary programme as especially generous and important this year.

Power and Booth remain committed to TBG&S’s international traffic, always a strong point. “We’re a small island,” Booth says. “We can’t become too inward looking and complacent.” Apart from bringing in curators and artists from abroad, there is a long-running exchange with Helsinki International Artist Programme. Add a lively programme of talks, screenings and other activities and Power’s conviction that TBG&S is an open, porous building, both locally and internationally, seems plausible.

The gallery exhibition programme has been generally good and often challenging, as it should be. Perhaps unsurprisingly, there’s a high tally of group exhibitions. It’s easy to form the impression that curators love these, perhaps because in a group context they more easily reign supreme. With solo exhibitions, on the other hand, the artist might easily eclipse them. Yet outstanding exhibitions are more often than not monographic. They stick in the mind, but they are also tough for an artist, because they are especially testing.

The current show, Temple Bar Gallery+Studios Are Dead, is a case in point. It’s literate: not only does the title reference Tom Stoppard’s Rosencrantz and Guildenstern Are Dead but, as its curator, Chris Fite Wassilak, notes, he originally studied literature, at Trinity College Dublin. He envisages the building as Hamlet, the first words of which, “Who’s there?”, he imagines the passersby asking as they walk by the gallery. He also has in mind here the gallery’s location in a designated cultural quarter.

Jim Ricks offers a mirror image of the McDonald’s opposite, a mini pop-up McDonald’s in the gallery. Barbara Knezevic has made a temporary, architectonic structure. It too is in the gallery, but its mirror image is directly above, in a studio space, flipping us from the public to the private. There is more in a similar vein. The writer Iain Sinclair’s contribution is a pamphlet, An Immodest Proposal, advocating the transfer of Sir Christopher Wren’s Temple Bar from London to Dublin. It’s all interesting, and pointed, but look at the mostly vacant space and it’s clear that the parsing of cultural meanings wins out over any other consideration.

It’s a bit like an exhibition as an interoffice memo. You wish someone would make a mess, just to show that they have some energy, some spirit left, that they can, as Rosencrantz and Guildenstern cannot, break free from their allotted roles.

Today Temple Bar is famous for being Temple Bar. It’s sobering to witness the unending stream of tourists who dutifully photograph each other in front of the titular pub. Often they are the same visitors who gaze perplexedly into the window of the gallery as they pass by – proof, if any were needed, that the presence of TBG&S is more vital and valuable than ever.

Brushing up on your high culture? Forgive my scepticism
5