All bicep, all heart: Is competitive arm wrestling a real thing? Damn right it is 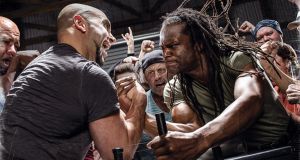 Game of Arms: “To be the best, it’s not about having the strongest arm, it’s all about the mind”

Where on your CV do you boast about your upper body strength? Does your “work experience” include “subjugating men to my will” or “dominating God’s creation”?

Does the accompanying photo feature you throwing a tree-trunk in the snow, doing lunges on a cliff-top or possibly, if you’re really cool, punching a bear? Do you go to interviews topless like Putin or wearing a figure-hugging vest like Vin Diesel? Is there any room for old-school masculinity in this crazy modern world?

The protagonists of Game of Arms certainly think so. This weirdly endearing programme (Dave, Thursday) looks at the low-stakes, semi-professional world of competitive arm-wrestling, and, along the way, the high-stakes world of sensitive modern masculinity. “Is [competitive arm wrestling] a real thing?” asks buff New York schoolteacher Mike Selearis, pre-empting your first question in a gravelly Batman voice.

“Damn right it is,” he growls, thus winning an argument you didn’t know you were having .

That’s just the kind of guy Selearis is. When we meet him he’s starting the day in his basement doing one-arm pull-ups being cheered on by a circle of muscley men, from his team New York Arms Control. Meanwhile his wife Deb is getting the kids ready for school cheered on by nobody (poor Deb). Like most grown adults, Selearis has a “long-time nemesis,” Kenny Hughes, a farmer from California who leads a club called the Sacramento Arm Benders. Selearis and his chums are very worried about the Benders (I’m not sure this name would work in an Irish context).

Hughes, we’re told, is a former arm-wrestling “child prodigy”. This makes me picture a Little Lord Fauntleroy type with one massive bicep, but Hughes turns out to be a bulky, sad-eyed man with a pony tail and a drink problem.

While Selearis declaims and glares like a professional wrestler, Hughes mumbles in a slightly heartbroken fashion. It’s like he never wanted to be an arm-wrestler at all and has been trapped by this great gift. I keep expecting him to say: “Curse my mad-arm-wrestling skillz. I just wanna dance.”

Luckily, Hughes is surrounded by more assertive folk. Allan Fisher, a moustachioed church minister, who looks like someone stuck he-man action-figure arms to a pipe-cleaner, likes to run around a mountain, flinging tree-trunks about and roaring. It’s kind of his thing.

Dan Fortuna, Mike Selearis’s right-hand man (pun intended), proves his worth by rolling up a steel frying pan with his bare hands.

“Hah,” he seems to be saying, “While the production of such household items has moved to Asia, their destruction is all-American.”

Sealearis and Fortuna frequently yell “Yeah!” and “Hah!” in self-affirmation (as I do myself). And Selearis listens to motivational tapes as he does arm exercises in the car.

“To be the best, it’s not about having the strongest arm, it’s all about the mind,” he says.

He also likes to trash talk. “I’m the flame and [Hughes is] going to get thrown into the fire,” he mutters while teaching a class of glassy-eyed school children who look like they’ve heard far too much about semi-professional arm-wrestling. Yet despite all the macho posturing, there’s something sweet about these big, loud, lumpy men.

They wear spray tan and take soothing bubble baths. One of them is a vegan. They cry and are careful of each other’s feelings. And, when you think about it, they’re going to a lot of trouble for relatively little money (the prize for the whole team, the narrator announces proudly, is “a cool $1,000”). If they began each bout of arm-wrestling by saying “hold me”, I wouldn’t be entirely surprised. A bit of pantomime aggro aside, it is clear those big arms were really made for hugging.

Terry Jones was the John Lennon of comedy
9