Aidan Dunne’s 2015: A Ruysch moment on a Turner Prize break

A number of issues come to mind, including the tendency to keep women corralled within culturally defined borders, and the downgrading of whole areas of creative endeavour as being women’s work 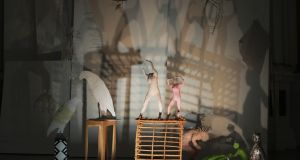 My Minds I , Exhibition by Janet Mullarney at Highlanes Gallery. Photograph: Jenny Matthews

In Glasgow for the Turner Prize exhibition, press visitors were invited to sample the city’s other cultural highlights. At the Kelvingrove Museum a painting displayed to the side of the Dutch collection caught my eye. It was a stunning floral still life that turned out to be by Rachel Ruysch. Ruysch, the daughter of a botanist, lived from 1664 to 1750. She was apprenticed to a flower painter when she was 15. It makes sense: the Netherlands, horticulture, burgeoning middle class, floral still life.

But it’s not the whole story. Floral painting was acceptable for women because they could not be true artists, like Rembrandt, and tackle biblical or historical subjects. Ruysch, however, was exceptional for her time and context in several respects. Although she married, and had 10 children, she painted throughout her life. And although the norm was that women painted as a hobby, she was one of very few women artists to build a professional reputation in a male milieu. She was a court painter for several years. At one point she reportedly won the lottery, but she was not deflected from pursuing her painting.

A number of issues come to mind, including the tendency to keep women corralled within culturally defined borders, and the downgrading of whole areas of creative endeavour as being women’s work. The point about Ruysch is that, as with Giorgio Morandi, what was regarded as a minor genre became for her a world of artistic expression. But then Morandi was a man. Look at one of Ruysch’s paintings and you know that, as with Morandi, you are seeing a whole, indeed infinite, world.

About 100 of her works are known to have survived (by her own meticulous records she produced about 250), and the Kelvingrove has three. Her works understandably fetch high prices if they come on the market. That she is not placed on a par with her male contemporaries says a lot about enduring cultural prejudice.

My Mind’s I: Janet Mullarney, at Highlanes Gallery, Drogheda, and the Butler Gallery, Kilkenny. Allegories of identity in brilliant, playful sculptures.

Gerda Frömel (1931-1975): A Retrospective, at Imma. An essential survey of a neglected modernist.

Pictures from the Surface: Tadhg McSweeney, at the Kevin Kavanagh Gallery, Dublin. Virtuoso sculptures for a wounded world.

Uniform: A Collaboration with Jackie Nickerson, at the National Gallery of Ireland until January 10th. What is a portrait? Think again.

The Connacht Tribune Printworks venue used by Galways Arts Festival and Tulca. Galway should secure this building and tailor it as an arts venue.

The Meursault Investigation, by Kamel Daoud (One World). Daoud revisits and expands on Albert Camus’s The Outsider – and, oddly enough, they turn out to be kindred spirits.