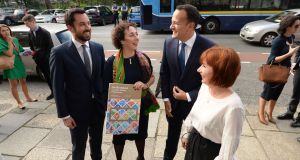 An active and engaged cultural sector “can enrich every aspect of our society and every stage of our lives”, Taoiseach Leo Varadkar has said.

Speaking at the publication of Local Authority Culture and Creativity Strategies for the period to 2022, Mr Varadkar said he hoped the initiative would lead the general public, including children, being encouraged to participate in arts and culture projects they may not otherwise have.

This five-year plan is part of the government’s Creative Ireland Programme, which was launched in 2016.

Since then each local authority has established its own culture team, made up of museum curators, librarians, arts and heritage officers, who have been tasked with coming up with ideas to serve their communities.

Among the projects that are included in the plan is one titled SkillsXChange. This will involve Syrian refugees in Co Westmeath sharing their practical skills with members of the Mullingar community, and vice versa. The exchange will focus on areas such as masonry, carpentry, and cookery.

In her speech to the event at the Irish Architectural Archive on Merrion Square, Minister for Culture Josepha Madigan paid tribute to the work to date carried out by each local authority.

“Arts, culture, heritage and in particular creativity, are now being viewed not only as amenities to improve the quality of life, but as a foundation upon which the future of our communities rests,” she said.