Workers should not stand having to sit down all day

Standing for part of the day leads to more energy, focus and productivity 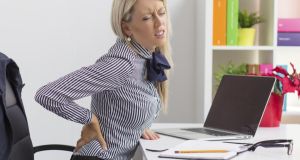 Seated-based work should be regularly broken up with standing-based work, the use of sit-stand desks or the taking of short active standing breaks 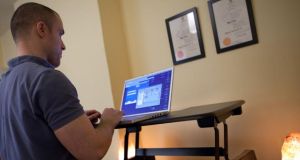 Mark O’Brien of Fit Plus Well using a Varidesk 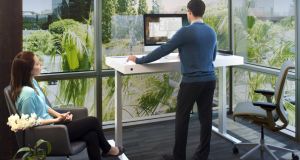 Working at a Stir Kinetic desk

The idea that sitting at a desk all day is bad for your health is not a new concept. Studies in recent years have linked a sedentary lifestyle with a host of ills, including obesity, type two diabetes, cardiovascular disease and even an early demise.

In June, the British Journal of Sports Medicine published a statement by an international group of experts who had considered the scientific evidence about the adverse effects of prolonged sitting.

They published recommendations for employers and employees in sedentary work environments, encouraging employees to aim for two hours of standing or light activity during the workday, eventually working up to four hours a day.

“To achieve this, seated-based work should be regularly broken up with standing-based work, the use of sit-stand desks or the taking of short active standing breaks,” the statement read.

The group encouraged employers to make their staff aware that prolonged sitting may increase the risk of cardiometabolic diseases and premature mortality.

He launched his e-commerce site, Fit Plus Well, last year after noticing an increase in the number of younger clients coming to him for treatment of posture problems, including headaches.

After treatment, though, many of O’Brien’s clients would return to sitting in an office for 50 hours a week, with their backs “in a constant state of flexion”. Translation: they were hunched over the whole time. He says he expected to see them again in six months with the same complaints.

O’Brien is the Irish supplier of Varidesks, adjustable-height desks that are spring-loaded to move up and down easily. They retail from €475, are retrofitted onto existing desks and come with an app that reminds users to stand up or sit down.

“Lots of companies are getting into this space because it is lucrative. Five years down the line, I think it will probably be compulsory for employers to offer it as an option. It’s already happening in Scandinavia,” O’Brien says.

“A standing desk takes the pressure off the spine and discs and takes people from sitting on their bum all day to standing and using the biggest muscle in their body to stand upright.”

According to O’Brien, standing for part of the day leads to more energy, focus and productivity, but he warns that people should stand in moderation.

“Most people have a more stable side and will favour that side. They’ll start hiking their hip up on one side, and that can lead to problems as well. What I recommend is 40 minutes of standing, 20 minutes of sitting.”

“Although if you’re moving, that’s obviously good for your body.”

Jennings works in the area of occupational health and ergonomics, trying to prevent musculoskeletal problems in the workplace.

“It’s about trying to get people moving, not just from sitting to standing, but moving and walking as well.”

She says there are many ways to incorporate movement into the workday, from stretching to taking regular short breaks to get up and walk around or climb the stairs. She says a lot of workplaces are providing breakout areas where people can go to have huddles or short meetings. While the purpose is to keep meetings short, one of the effects is getting people standing.

In the course of her work, Jennings is seeing more sit-stand desks, especially in new or newly renovated office buildings.

“While they are certainly not the norm, we are definitely seeing a bigger percentage of sit-stand desks being provided, and we would expect that will continue going forward because the evidence supports that it’s good for people,” she says.

“If workplaces are providing sit stand work spaces, people need to be educated in the use of them. What we find is a lot of people just don’t use them. The vast majority of people choose to sit.”

Jennings often looks at the chair people are using and whether it provides enough support, rather than changing the person’s desk.

He has been using a sit-stand desk for six months and says his back pain is gone, and his neck is not stiff anymore. He had a pinched nerve that caused arm pain, which also went away. He stands for half of his workday. “It can be tiring because you’re on you feet all day. It took me about two to three weeks to get used to standing, so I don’t get tired anymore,” he says.

“It allows you to change positions throughout the day, which it turns out is really healthy for people,” says Stir CEO JP Labrosse. “These kinds of desks have become very popular in the United States.”

Labrosse, a mechanical engineer who led the engineering teams for some of the early Apple iPods, says he wanted to make it effortless for people to change positions. He also wanted to find a way to encourage people to use the desk’s functions.

“We did a survey of companies that had height adjustable desks and found that only 30 per cent of the people that had these desks were using them. The rest left them in the seated position all the time,” he said.

The solution: the Kinetic Desk takes what feels like a breath, moving up and down about 2cm, to remind people to stand up. Users can ignore the prompt, and the desk gradually learns when people want to move and when they do not.

Built-in sensors know when you arrive at the desk and keep track of calories burned while sitting or standing. The desks can sync up to Fitbit and other devices, which Labrosse says is “part of the whole health quantification movement”.

1 ‘Sad day’ for House of Ireland as tourism retailer goes out of business
2 ‘My rent here is so low it’s a joke’
3 Donohoe’s new role puts State at centre of debate over EU’s future
4 Paschal Donohoe’s election as Eurogroup president ‘a great win for Ireland’, says Taoiseach
5 Caveat: The tourism sector deserves to be taken more seriously in this crisis
6 The €1 billion market: retailers who serve tourists face double trouble in a pandemic
7 Water supply problems are not of Irish Water’s making
8 Donohoe’s new role, House of Ireland shuts, and being indispensable at work
9 Gardaí raid Irish office of failed German payments group Wirecard
10 Dalata agrees new debt facility as it recovers from Covid-19
Real news has value SUBSCRIBE