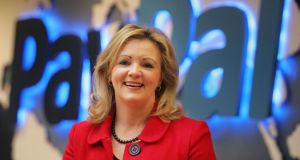 PayPal’s Louise Phelan: “It frustrates me that gender is an issue in business.” Photograph: Alan Betson

While the status of women in the workplace has improved somewhat in recent years, progress has still been pitifully slow in some key areas. Leadership is an obvious case in point.

The number of women chief executives at Fortune 500 companies is currently at an all-time high of 26, up from just 12 in 2011. But women still hold just 5 per cent of all Fortune 500 CEO roles.

Closer to home, the situation isn’t any better. A survey published by Catalyst in January shows that just one in 10 directors of Irish publicly listed companies are women.

It’s been a long-standing cliché in business that men and women have different leadership styles. Some studies have sought to show these differences explain why women often fail to make it to the top.

Notwithstanding that these studies often underestimate the effect of additional factors such as having children, the research has also often produced conflicting results on the possible role that gender plays in management.

The stereotypes would have us believe that female leaders are great at nurturing skills such as building relationships, while men are more goal-oriented and ruthless. There may be an element of truth to them, but many of Ireland’s top women leaders say these definitions are increasingly outdated.

“My experience is that these stereotypes don’t exist to the same degree any more. This generation of leaders has a different view of what leadership is compared to what we witnessed in the past.

“Traits that would have once been ignored or downplayed – such as emotional intelligence – are becoming more valued and are something that both female and male leaders need. Leadership goes beyond gender and depends on the person you are and the kind of personality you have,” she said.

For Louise Phelan, vice president of PayPal’s global operations in EMEA and president of the American Chamber of Commerce Ireland, even having to address the topic gender differences in leaders is somewhat annoying.

“Everyone has their own unique leadership style. It’s not fair to categorise styles based on gender. For me, leadership is about empowering those around you and trusting their judgement. It’s about investing in people and creating a culture of two-way engagement that rewards and values them,” she said.

Phelan adds that while there’s still plenty to do in terms of promoting women to leadership positions, there’s also something of a revolution going on in the workplace.

“It’s an exciting time to be a woman in business. We have entire movements dedicated to encouraging female entrepreneurship and empowering women, and society is changing all the time. We saw recently that there are more female solicitors than male, so even industries that used to be known as ‘old boys’ clubs’ are diverse and inclusive now,” she said. A recent report by the consulting group Right Management Ireland, which surveyed 50 senior business leaders, found that when it comes to leadership, men and women actually share startlingly similar views on the qualities needed to be an effective leader.

The main difference recorded by the survey centred on the importance of developing connections and relationships with others. Women leaders were much more likely than their male counterparts to cite this quality as essential when a senior executive is considering undertaking a leadership development initiative.

Lennon isn’t surprised. “Virtually all women I know are very strong at developing relationships and connections with people. If I reflect on my own leadership style and my progress throughout my career in different organisations, including Eircom, the ability to build relationships is hugely important,” she said.

Phelan also highlights the importance of being able to develop relationships with others.` “Women often lack confidence in comparison to their male counterparts. They want validation from their peers, investment from their boss and supportive working relationships to help build confidence. Perhaps that’s why we value developing connections and relationships so much. It’s the right attitude because leadership is all about people,” she said.

Emer Gilvarry, chairperson at the law firm Mason Hayes and Curran, said there’s no doubt that men and women can approach life differently. She believes, however, that as men take on more responsibilities outside the workplace, some of the extra challenges women used to face are easing.

“There comes a point when gender is actually not a decisive factor in leadership,” she said. “Some research suggests that men are more visionary than women. I think that’s unfair to women though because they are more likely to be collaborative and put things across as a group vision, rather than as something that emerges out of solitary analysis,” she said.

While some people have called for the introduction of quotas to boost diversity at boardroom level, Gilvarry is unsure of the need for them here.

“I think organisations are becoming more pro-active in helping women come through the system and I think it’s all down to timing and will work itself out. Quotas are something of a blunt instrument and if it accelerates women getting on boards, then I’m fine with that, but I would prefer that organisations do it by themselves rather than have it imposed on them.”

“It’s not just about boards, however. The real issue is moving more women to senior management positions and this is where more work needs to be done. I’m not willing to wait a couple of hundred years for that to happen naturally. I hope we can achieve it with a quota and then never have to talk about them again.” she said.

According to Phelan, everyone in business has a responsibility to encourage women to aim higher.

“Each and every one of us has an obligation to inspire women to take on senior roles. It’s up to us as a society and particularly up to our business leaders to support our women and encourage them to develop their careers.

“If we succeed in encouraging more women into leadership positions, we will change the face of the corporate world because with every woman that makes it to the top of her game, we get that bit closer to changing the status quo.”

Whether quotas are the answer or not remains to be seen but the increasing acceptance that women thrive in leadership just as much as their male counterparts should mean that more and more of them will take a seat at the top table.