After a tough start, the Cork-born marketing graduate is progressing in the Big Apple 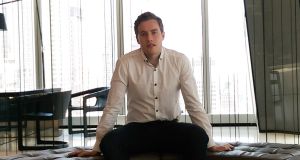 Patrick Kirby in his office on Fifth Avenue: “It was more traumatic moving to a new country than I thought it would be.”

Patrick Kirby is doing well for himself. But the young Cork man based in New York City says it has a lot less to do with luck and a lot more to do with just making it happen.

And with a leadership role in a Fifth Avenue office, this marketing student has certainly made good across the Atlantic.

From the small village of Caheragh, Kirby is no stranger to business. His parents own an oil distribution company as well as a pub, a shop and a farm. Kirby studied marketing in NUI Galway, graduating in 2013.

Looking at post-grad options, Kirby chose Cairns School of Business in Galway where, he recalls, “the unique thing about it was we were on a full-time work placement”.

Kirby secured work with the ESB for his Masters in Marketing Practice, a placement which, alongside his coursework, he thinks was beneficial to his new life in the US.

“The academic side was very time consuming but great training for coming to New York. I had a lot of long days, a full-time job and studying on top of it. It was demanding.”

Having secured a first class honours masters, Kirby accepted a new contract with the ESB, though he knew he was unlikely to see it out. America was calling and he just needed the push to get him there.

In September 2014, he heard that the USIT Graduate visa had nearly filled its quota. It was the end of a five-year pilot programme and Kirby knew the chance might not come around again. By mid-December he was heading home to spend a couple of weeks with his family before heading across the Atlantic.

Jobless arriving in the city, Kirby started casting his net wide, applying for jobs. And it wasn’t just looking for work that was hard.

“I arrived in a very harsh topography. It was the worst winter in New York in 20 years. The snow is different here in the US. It snows and it lodges.

“I dealt with a lot of adversity here at the start,” he says. “A lot of it was personal. It was a lot more traumatic moving to a new country than I thought it would be. I struggled a lot and, even to this day, I’m not even fully settled in in New York. I’m a proud Irish man, I’ll never fully settle in.”

Two months after his arrival Kirby was hired by a start-up company GlassView which deals in video advertising. By the end of his first week as a digital operations executive, the company offered to sponsor a visa for him.

“There were plenty of people who could do my job and who didn’t require a visa to work in the US. It was a big statement of intent on their part,” he says.

“It was 12 or 13 weeks into my current visa and I was already having to think about my next move. I think that was a bit of bigger picture thinking very early on.”

The move has worked out well for Kirby, who is now the manager of accounts and global team lead with GlassView but he believes that.

To survive in business in New York, you need a lot more than luck.

“What I would say to people is to come out, look for areas where you can go, look for good mentors. Get the skills and the expertise, then the money will follow. People seem to think they should look to where the money is. If you’re passionate about doing it, things are going to happen for you. If you have an attitude of aptitude, it’s an easy recipe for success.”

Another thing that is different from working at home is New York tax.

“New York tax is pretty crazy. Definitely, if you are earning a substantial fee or salary, I would say to get some advice, professional advice. Don’t think you can do it all. Bring in your lawyer, your attorney or your accountant.”