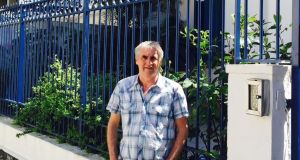 Sean O’Flynn: “It was love at first sight when I crossed the border into Brazil. Music blasted from the homes of border guards, everybody was smiling”

After leaving UCC with a commerce degree in 1976, Cork native Seán O’Flynn moved to London, where he worked in IT.

“I think rambling is in my genes,” he says. “My grandmother left Co Cork in 1909 to be a nanny for the family of the Spanish prime minister in Madrid. In 1912 she moved to Buenos Aires, where my mother was born.

“My grandmother regaled me with detailed stories about life in wonderful Buenos Aires and said she would have loved to stay there.”

So when O’Flynn got bored with his London job in 1981, that lure of South America surfaced and he set off to explore.

“In February 1982, I was in Mexico city and was invited to a Brazilian carnaval party in the university hosted by the many Brazilian political exiles who were there fleeing the military dictatorship. I felt really connected to them.”

That September he travelled overland from Caracas in Venezuela to Manaus in Brazil via the Grand Savannah.

“It was love at first sight when I crossed the border into Brazil. Music blasted from the homes of the border guards and everybody was smiling and laughing.”

O’Flynn travelled up the Amazon to Colombia on a small cargo boat, stopping in lots of villages along the way where he was impressed by the people’s happiness in the face of so much adversity and poverty.

“I visited Salvador in the state of Bahia, the first capital of Brazil, and felt an instant bond with the city and its people.”

The impressive Portuguese colonial architecture perched above the second-largest bay in the world enthralled him. The stunning beaches, the Afro-Bahian culture omnipresent in food, music and dance, encouraged him to stay.

When he returned to London later in 1982, he couldn’t settle, so he bought a one-way ticket and never looked back.

“My first job was as an English teacher. I wasn’t very good at it but it helped pay the bills.”

O’Flynn moved on to theatre, producing comedy, a musical and touring all the major cities of Brazil. In 2005, after travelling around the country for seven years, he decided it was time to settle down. He bought an old, colonial-style guesthouse in Barra, just 120 meters from the beach and the bay in Salvador, and called it Pousada Estrela do Mar.

“The hotel has just nine en- suite bedrooms and we only serve breakfast, as there are so many excellent restaurants within a few minutes’ walk. I have met so many interesting and lovely people from all over the world.” His clients are a mix of Brazilians from other parts of the country, Europeans, South Americans and North Americans in that order.

Even though Salvador has doubled in size from 1.5 million in 1983 to over three million people today, the pace of life is laid back. O’Flynn doesn’t drive. The seafront promenade has been pedestrianised and he whiles away many evenings eating and drinking in the outdoor bars and restaurants.

Brazil is not an easy place to start a business. The World Bank rates it number 120 out of 183 countries, putting it below places such as Nigeria and Burkina Faso. Too much bureaucracy at the municipal, state and federal levels make it daunting for the novice.

The minimum investment is 150,000 Brazilian reals (about €42,000) but there are conditions about creating employment for Brazilians within two years to get a visa renewed. Retirement visas are quite easy to get if the applicant has a pension of at least $2,000.

O’Flynn is now a permanent Brazilian resident with the equivalent of a green card.

“Some soccer games are being played here in Salvador. Also a lot of people coming to Rio for the Olympics are adding on other destinations and coming here.”

The Zika virus has put a black cloud over the event. O’Flynn thinks there has been an over-reaction.

“There is cause for concern for women of childbearing age who plan to become pregnant but chances of catching it are very low, especially in our winter season.

“So far only six deaths have been registered from Zika and those have been among people who were not in good health to start with, as is the case with deaths from flu in countries like the US.”

O’Flynn returns to Ireland at least once a year and loves his visits, but he’s too used to the tropics and has no intentions of returning to the cold.

1 Bank leaked my loan request to family who tried to rip me off
2 EU and British positions harden ahead of Brexit talks
3 Ryanair and Aer Lingus monitor impact of coronavirus on travel to Italy
4 How can I view my dead brother’s will if I’m not the executor?
5 Mastercard to create 1,200 new jobs by expanding base in Dublin
6 Digicel’s earnings rise as it looks towards refinancing $1.3bn of bonds
7 US stocks have worst day in two years as coronavirus fears spread
8 Hotels outside Dublin hardest hit by tourism slowdown
9 Over $12m from sale of Walford handed over in Sean Dunne bankruptcy case
10 Procrastination: How to deal with it in the workplace
Real news has value SUBSCRIBE