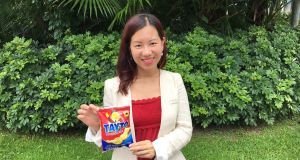 Irish expatriates are used to supping Guinness and various craft beers in the drinking dens of Lan Kwai Fong and Wan Chai in Hong Kong, but they’ve not yet been able to pair their pints with a bag of Tayto.

Hong Kong-born, Dublin-raised investment banker Rosa Chan hopes to change this, and believes that selling Ireland’s best-known crisp brand in the world’s most freewheeling capitalist economy is both a business opportunity and a way of bridging the two cultures in which she was raised.

Chan’s family moved from Hong Kong to Malahide in 1985, a year after China and Britain signed the Sino-British Joint Declaration, which allowed for the transfer of sovereignty over Hong Kong to China.

She attended Scoil Íosa and her family set up the Good World restaurant in George’s Street.

“I come from a family of entrepreneurs. So I thought ‘Why not?’ Every time we go back, we pack up bags of goodies, and Tayto is such a big name,” said Chan, her Malahide accent very much in evidence despite years back in Hong Kong.

“I grew up with Tayto, and I found I was explaining various things to my kids, and then I thought I could do something to explain my roots in Ireland. There are not a lot of Irish products in Hong Kong yet,” she said.

She has shipped more than 300 boxes of the crisps in three containers, and they have been shifting fast.

“Having lived in both places, I can understand what the Chinese palate is like, they like new flavours,” she said, although cheese and onion flavour is still by far the most popular.

Chan has been selling Tayto to bars and restaurants in Hong Kong since last November and from July the crisps will be sold exclusively at the prestigious Hong Kong Football Club.

Margins are tight, and starting a business with a brand with niche appeal was not easy. Chan is doing the promotion herself. She laughs as she tells of giving away bags and bags of product, confident that people would fall for the crisps – and everyone loves a freebie.

“November was a great start, because I had Christmas, then Chinese New Year. Then there was the Hong Kong and Macau Irish Festival in March. Now I have orders waiting,” she said.

She is also examining retail distribution channels such as some of the territory’s up-market retail chains.

“Initially I identified Irish pubs and restaurants because they know Tayto, and now I am looking at the big restaurant groups with numerous restaurants, so now it’s both Irish and local outlets,” she said.

“Some of the big chains like Wellcome have too many brands already so I am trying to identify those who want Tayto. So far it’s a good balance. I am hoping to do more products,” she said. In an interview in Hong Kong’s Hyatt hotel, she tells of how she was the first Asian in the school. Her sister was the second.

“In 1985, it was a bit awkward, but people were friendly. People often couldn’t tell between Hong Kong and China and thought everyone looked the same but it was fun and people wanted to find out more,” she said.

Graduating with a business, economics and social studies degree from Trinity in 1994, she returned to Hong Kong and soon began working in banking, at investment bank UBS, various dotcoms and Barclays Capital.

However, she decided she wanted to do something else once she had children as her investment banking work involved so much travel. She got involved in the kindergarten sector, and began to explore ways to bring in Tayto.

After cold calling around, she eventually got in touch with Ray Coyle’s Largo Foods, which owns the Mr Tayto brand, at their Meath headquarters.

“I’ve worked with Tayto for a while now, so we’ve had lots of discussions about what I want to do and they are very keen. They are happy that it’s started, although for them it is still very small. It’s been win-win,” she said.

There are logistical issues with selling Tayto in a market so far away from where they are made. The fact that the crisps are made with real potatoes, not just starch, has proven popular with customers, but there is a downside to fresh product.

“A lot of the other brands have a very long shelf life, they can last a year or longer, but they have a lot of preservatives. With Tayto, they expire in three months. So I’ve got two short months to get them to the places I want to sell them,” said Chan. She flew them over to Hong Kong twice, but that is not cost effective, and it takes a month to five weeks to ship them over.

She hopes to bring over a number of other products as shipments work better if they are scaled up, and suppliers are keen to have a whole range of Irish goods.

Chan got involved with the Irish Chamber after the arrival of Consul General Peter Ryan two years ago, and is tipped to become the first Chinese head of the chamber of commerce in the next term.

“I didn’t really know a lot of Irish people in Hong Kong, but I got to know some and, once I got involved with the consulate, I got to know more. I had my first meeting at the chamber, and then I found the accent came back,” she said.

She is working with the chamber in trying to develop and promote Irish education. And although she believes it will not be a quick process, she sees scope for Hong Kong and mainland Chinese children travelling to Ireland to study.

“Chinese parents are very familiar with sending their kids to school overseas,” she said.

Longer term, a possible target is the mainland Chinese market. There was an attempt back in 2010 to bring Tayto into the Chinese market by entrepreneur Qian Wei, but Largo Foods decided not to pursue plans to build a factory in China.

1 Columbia Sportswear defies gloom with first Irish standalone shop
2 ‘The rental situation stops me moving back home’
3 Restaurants file court actions against insurers over lockdown losses
4 David McCullagh announced as co-host of RTÉ Six One News
5 High Court appoints interim examiner to Compu b parent company
6 Why are markets booming when a crash is on the way?
7 Ireland faces 'deep downturn' this year and may not rebound until 2024 if there is a second wave
8 How to further divide the economy using the wage subsidy
9 Second Covid-19 outbreak and no-deal Brexit an appalling vista
10 VAT cuts are for businesses – consumers will still pay the same
Real news has value SUBSCRIBE