CSO data predates coronavirus, which has triggered a jump in working from home 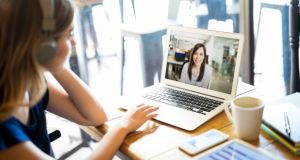 According to recent data from Eurofound, Ireland had one of the highest rates of home-working during lockdown. Photograph: iStock

The Republic had the fourth-highest rate of people working from home in the EU last year, according to the Central Statistics Office (CSO).

As part of a recent Labour Force Survey, the CSO asked additional questions relating to place of work and commuting times.

It found 5.4 per cent of workers here reported their home to be their primary place of work, compared with an EU average of 2.9 per cent.

The incidence of home-working has, however, soared with the onset of coronavirus.

According to recent data from labour market think tank Eurofound, Ireland had one of the highest rates of home-working during the lockdown period earlier this year, with about 40 per cent of paid hours performed by employees from home.

The CSO study found the main place of work for employees here last year was the employer’s premises or their own premises (78.3 per cent), which is very similar to the rate in the EU27 (79 per cent).

Women were more likely than men (87.9 per cent compared with 70 per cent) to work at the employer’s or their own premises.

Working at the employer’s premises was also correlated to age, with younger people more likely to do so than older people.

On commuting times, the Republic ranked second-highest among EU member states at 11.2 per cent in terms of the likelihood of workers having a one-way commute of one hour or more. This finding may reflect under-investment in public transport and congestion.

Construction workers were the most likely to report having a one-way commuting time of one hour or more (24.7 per cent), while those working in the agriculture, forestry and fishing economic sector were the least likely (2.5 per cent).

The average commuting time (for those with a commute) in the State was 28 minutes which is higher than the average for the EU27 at 25 minutes, the CSO found.

This meant Ireland was ranked joint fourth highest for average one-way commuting times in the EU.