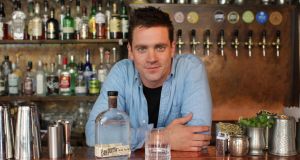 Dave Mulligan has been living in London for the past four years. Having run the popular speakeasy-style pub Shebeen for three years, he and his business partner Cara Humphreys launched Bán Poitín – a new brand of poitín which is stocked in numerous high-end bars and retailers in the capital – eight weeks ago.

Launching a new brand means Mulligan’s working days are long and time off is rare. When we meet in the Marker Hotel in Dublin, he has just had his first day off in seven weeks. Mulligan’s daily routine involves hitting the emails by 8.30am – liaising with the bars, restaurants and shops currently stocking the brand and lining up meetings with potential stockists in London, Dublin and Belfast.

The bars of Belfast are an emerging market for the brand given the city’s proximity to the source of Bán Poitín – the Echlinville distillery in the Ards Peninsula which is a partner in the brand. Working with Echlinville has involved plenty of to-ing and fro-ing between London and Northern Ireland in order to work on product development and to bring the product to market.

After electronic housekeeping, it’s onto the bike for Mulligan and off around London with bottles of poitín in his Stighlorgan backpack. He meets the city’s best bartenders and mixologists – promoting the brand, providing one- on-one sessions with customers and occasionally hopping behind the bar himself as guest bartender – all in an effort to promote the brand, reveal the back story of poitín and show the professionals how to incorporate it into their bar menus.

“We are a small emerging brand,” says Mulligan. “So we don’t have a huge amount of stock to throw at people. That means it’s a case of building relationships, meeting people in person and wearing out shoe leather. We don’t have deep pockets but we do have time.”

Admittedly the line between business and pleasure can seem blurred as Mulligan is often expected to work late and to be seen to be interested in his product. “Of course you must remain professional but in this industry you also have to be seen to be drinking your product.”

Having worked in the bar scene in Ireland, New York and France, Mulligan says he landed on his feet in London: “I met an older Irish couple who wanted to open a speakeasy bar. It was a classy lounge but offered a wide range of Irish whiskeys.” He and business partner Cara Humphreys (who comes from a marketing background) began to investigate the idea of poitín, its history and its potential.

The time was right, says Mulligan, for the launching of the product. The cocktail scene and the craft beer market has exploded in the past few years and he sees the advent of new spirit and whiskey brands as a natural development of the market.

“If you look at the craft beer scene, people have started caring about what beer they’re drinking and where it comes from and spirits are the next step. It’s already happening in London where the scene is exploding. In London too, you are really talking about the top of the food chain in terms of the skills and level of expertise bartenders and cocktail makers have.

“The Irish Whiskey Industry estimates that there will be 35 new distilleries opened in Ireland by 2019,” says Mulligan. “We see poitín as the most interesting thing you could make in Ireland.

He believes that the city has been a great place in which to launch and credits the openness of many of those working in the drinks industry there, including Willy Burrell owner of Vestal Vodka and Mark Ward of Regal Rogu, both of whom have provided him with plenty of advice. He also credits Humphreys as “one of the best finds since moving to London” and is keen to emphasise how vital she is to the brand in a business often associated with men.

“Irish whiskey is getting more popular now thanks to the cocktail scene there which is definitely the best in the world. There are new bars opening all the time and we are lucky that we have a huge network of support in the drinks industry with people who are a couple of years ahead of us or a year behind us with new product. We offer each other a lot of support.”

Mulligan has a tight network of friends and associates in London, many of whom are Irish. He believes that there is no longer a distinction between Irish creatives and those of any other nationality in the city.

Speaking of himself and other Irish business owners in London, he says: “We hate pushing the Tricolour and the shamrock. We don’t think it’s cool, it’s not how you build a brand these days. There are many other people in London who share our values. There are lots of creative Irish people working in London but we don’t need to push the leprechaun thing.”

“Years ago it was Stoke Newington, Camden Town and Kilburn – all the Irish people flocked to those places and stuck together. It’s not about Irish ghettos any more. We are intertwined in London culture . . . We all know we are Irish and we look after each other but it doesn’t benefit our businesses by ramming the Irish thing down people’s throats.” ban-poitin.com