Lucy Kellaway: It is odd to persecute the useful ‘and’ 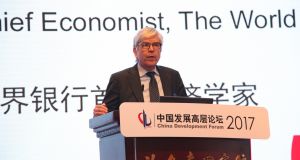 Paul Romer: ordered his staff to write more clearly, shut them up whenever they banged on interminably in presentations, and insisted all reports were short and lucid

The story was one of the saddest I have read in ages. The World Bank’s chief economist ordered his staff to write more clearly, shut them up whenever they banged on interminably in presentations, and insisted all reports were short and lucid. Instead of being lauded for his bravery Paul Romer was punished like a heretic, and his management duties were taken from him. His story reads like a corporate take on the martyrdom of Joan of Arc.

There is only one quarrel I have with Romer. Among his edicts was to impose a quota on the word “and”, ruling that an official report should contain no more than 2.6 per cent of them. It is a bit odd to persecute the common conjunction, which has the advantages of being useful, clear and short, when there are all those words out there – leverage, deliver, journey, dialogue, platform, learnings or robust and a thousand others – that are none of these things.

Yet when the Stanford Literary Lab published a paper in 2015 analysing World Bank reports, “and” came in for a hiding. The authors noted its use had almost doubled in the previous 70 years, and mockingly quoted passages in which ugly, unrelated nouns were slung together with chains of conjunctions.

But is this little word really to blame? Over the past week I have immersed myself in assorted texts, starting with the work of Martin Wolf, who writes at least as clearly as any economist I have come across. Sure enough, in his last column my computer counted an admirably modest 2.5 per cent of ands. Next I studied a column by Janan Ganesh, a man whose prose is widely admired. He did even better with only 2 per cent.

After that I widened my net and downloaded King Lear in its entirety, to find the Bard used a mere 19 ands per 1,000. When you consider most of these are stage directions – “Enter Kent and Gloucester” – the true score is lower still.

I was about to conclude that Romer was on to something, but then turned to my own writing and found that in last week’s column I used a shaming 30 ands per 1,000 words. Romer would have despaired.

In a last-ditch effort to prove him wrong, I examined Pride and Prejudice, a most elegant novel by the most elegant writer in the English language. I downloaded a chapter at random and, bingo: Jane Austen used a whopping 3.8 per cent of ands.

At the very minute I was doing this, on stage at the Hay Literary Festival a former deputy of the Bank of England was telling an audience that in order to get its economists to write intelligibly the bank made them study the work of Dr Seuss. On hearing this, I went straight to The Cat in the Hat – and to my delight found ands sprinkled everywhere – 46 per 1,000.

What this proves is that ands are a problem only if they lead to length or confusion. Dr Seuss can get away with extravagant use because his text is so spare. In just 1,620 words he tells a more surprising and memorable story than anything in any bank report.

Yet even if economists were forced to use fewer words that would not necessarily do the trick. Long nearly always means bad, but short does not mean good. One of the cruddiest bits of writing I saw last week was a letter from Alex Cruz, head of British Airways, sent to Executive Club members after an IT malfunction stranded 75,000 passengers.

It was only 421 words, but begins simply enough: “I wanted to contact you personally to apologise.”

Yet already this was twaddle, as a mass email from a robo address is as impersonal as it comes.

As well as being simple and short, good writing must be true. I stared at the downloaded Lear text on my computer and read the closing lines by Albany: “Speak what we feel, not what we ought to say.” Yet even that will not help the economists. The urge to write pompous drivel is too deep for a quick immersion in Shakespeare or Dr Seuss to shift.

Any economist will tell you the best way to change behaviour is to change incentives. That means promoting those who write well. It does not mean punishing someone who tried to get his colleagues to write text that people might conceivably want to read. – Copyright The Financial Times Limited 2017

1 Election 2020: Parties' pledges on housing simply don’t add up
2 Britain after Brexit will not be alone, but it will be lonelier
3 Pensions: Estonia plans to unleash a potential €4.85bn on economy
4 Banks withdrawing from ATMs – another failure of regulation
5 Airbnb backs creation of EU digital regulator after court win
6 Getting out from under ‘never-ending’ Celtic Tiger debt burden
7 Coronavirus shuts down Starbucks, Toyota and BA
8 Marlet snaps up 1.8 acre Sandyford site for €17m
9 Orange Capital Partners acquires prime Dublin rental portfolio for €75m
10 Ryanair accepts labour agreement proposal for Irish pilots
Real news has value SUBSCRIBE