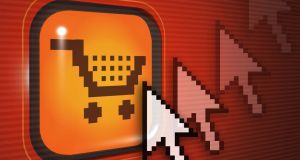 Ireland may be home to many of the big internet companies, including global online marketplace Ebay, but many of our domestic small and medium enterprises are lacking an online presence and are losing out on potential business.

According to figures from Ireland’s domain registry, IEDR, 37 per cent of Irish small and medium enterprises have no online presence, while 91 per cent can’t process online sales. (http://iti.ms/1WcruQB)

“Companies are losing a huge amount of money in online sales abroad,” according to Mark Fielding, chief executive of the Irish Small and Medium Enterprise Association (Isme). Irish customers are also increasingly buying online from sites abroad, says Fielding, and Irish companies are losing out on this business too. “We are not selling to our own people,” he says.

Irish retailers, in particular, are affected by not having the ability to process online sales and lose out on business to international and UK retailers. “The evidence suggests that Irish retail is losing out at fairly remarkable levels to international online retail businesses,” said Thomas Burke, director of Retail Ireland.

“The situation has improved over the last three or four years, but we are still a long way behind our European and international counterparts when it comes to online retailing,” he said.

According to a digital scorecard issued by the European Commission, http://iti. ms/1WctU1R, the average percentage of small companies in Europe who sell online is 26 per cent.

The commission research also estimated that 32 per cent of Irish SMEs sell online, but only included businesses with more than 10 employees in the research, which, according to Fielding, account for just a tiny percentage of Irish businesses.

“More than 90 per cent of businesses in Ireland have less than 10 employees,” said Fielding.

There are a number of factors that hinder small and medium business from developing an online presence. According to research by the IEDR, a lack of technical ability and financial supports are two of the issues holding companies back.

Burke agrees that the cost of going online has been an issue for Irish retailers over recent years. “All of this has to be viewed in the context that we are emerging from what has been a very difficult six or seven years for Irish retail. The money hasn’t been there to invest in online platforms,” he said.

According to Fielding the main factor keeping businesses in many rural areas from going online is the lack of high-speed internet access.

“You can draw a line up the west coast,” he says. “Our own research shows that so many businesses would love to be trading online but they just can’t do it. Some have lovely websites, but without broadband they don’t have the ability to trade online.”

This is backed up by the experience of Bronagh O’Sullivan, owner of Bow and Pearl boutique in Ranelagh, Dublin, who believes that having an online presence has been invaluable in building up her business.

“It’s not the easiest thing to do. There is a little bit of work involved, but the benefits then are fantastic,” she said. “Our sales have increased since we went online in 2012 and every year we’ve had an increase in online sales.”

There are an increasing number of incentives and schemes to help encourage small and medium companies to get online. Isme has its own scheme, which gives a discount for companies to set up a business website, and it has already seen a great take-up for it, says Fielding.

A wider Government scheme has been introduced under the national digital strategy that provides vouchers, known as online trading vouchers, up to the value of €2,500, to companies to develop or upgrade their websites.”

“It’s a brilliant scheme,” says Fielding. But he adds that the online voucher scheme needs to be promoted better, as not enough people know about it.

Burke says Retail Ireland welcomes the scheme, but believes there is a lot more that needs to be done.

“We suggest that there should be almost like a tax credit set up, so that any money that is allocated to an online presence for a retailer could be offset in terms of a VAT bill or some other mechanism,” he said.

O’Sullivan believes that being online has helped her to build a reputation for her shop both outside Dublin and even abroad.

“Our social media presence and the website has helped to build a reputation for the shop. We have people travelling to us; they have seen the website and really liked the look of it, and want to see what we are about. I think it does help.”

She has even had an online sale from as far away as Japan. “It’s great to get international customers and to think that someone in Japan is looking at our website,” she adds.