Irish innovator in use of images to tailor surgery 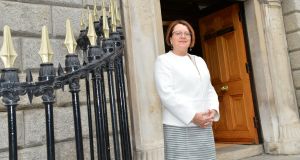 Four of her father’s siblings are medical professionals and even her grandmother was a dentist who trained at the same college Tempany-Afdhal went to, the Royal College of Surgeons in Ireland (RCSI).

What was a little more unusual perhaps was her chosen specialty of radiology. “At the time you were very much in the basement, in the dark, and no one ever really knew you were there,” says Tempany-Afdhal.

However, during her rotation at what was the then Richmond hospital, she was influenced by the work of a close family friend, Prof Max Ryan, who was a professor of radiology, “an inspirational kind of guy”.

“It appealed to me because it was a sort of detective puzzle: put together a list of problems in an X-ray and try to find out what is wrong with the patient,” she says.

Graduating from the RCSI in 1981, Tempany-Afdhal had originally planned to specialise in radiology in Ireland, but the programme only ran every two years and she had just missed the start. Rather than waiting, she looked to the United States and was accepted on to a programme at Chicago’s Loyola University.

While she found the city “a daunting place when I first got there”, Tempany-Afdhal was excited about her training and the opportunities being in the US afforded her.

“For training purposes I thought I want to be in a place where they have got the latest and greatest and state-of-the- art equipment and to be able to learn that,” she says.

MRI scans were a new technology and something she found very exciting. Seeing the technology at a conference in Chicago, she felt “a little bit like Alice in Wonderland”, she recalls.

While her plan initially was to come back to Ireland after her training, “that didn’t pan out” and Tempany-Afdhal has remained in the US since.

After finishing her residency in Chicago, she completed a fellowship in Baltimore and went on to work at the John Hopkins University. She then moved to Boston where her now husband, also an RCSI graduate, Dr Nezam Afdhal, is chief of hepatology at Beth Israel Deaconess Medical Centre.

She took a position as a diagnostic radiologist at Brigham and Women’s Hospital in 1991 and it was there she became interested in image-guided interventions, a way of using a patients’ X-rays and other images to guide their treatment, including surgeries.

Tempany-Afdhal is an innovator in imaging and medical devices and has been instrumental in developing an image-guided therapy programme that is helping to use a patient’s X-rays and scans to tailor the surgery to an individual.

“Our insides are all different and it is very important to use our images to treat our diseases,” she says. While many images are taken, it can be difficult to put them into “a framework that a surgeon can use in real time”. “We bring them [the pictures] into the operating room and make the surgeons use them for whatever he or she is doing.” she says. “We think it is our way of personalising medicine.”

She has been instrumental in the development of the advanced multi-nodal image guided operating room (Amigo) suite at the Brigham and Women’s Hospital. It is a series of three rooms that combines an operating suite with MRI and Pet scanners. “We use the images to do the operation,” says Tempany-Afdhal.

The healthcare systems in the US and in Ireland are very different. “The economics are different,” she says. In the US, there is no national health services and health is “a commercial activity in many ways”.

Until the introduction of Obamacare, “there were a lot of Americans who didn’t have healthcare”. Its introduction is something that she is very positive about, describing herself as an “avid Democrat”.

A system that combines the US and the Irish system would probably be the perfect health service, she believes.

Tempany-Afdhal has come across many other Irish people living and working in the US and believes that Irish people have a lot to offer when they travel abroad to work.

“I think, in general, Irish people come out of the country very well educated compared to some of the second- or third- level students in the States. Irish people should exploit that, recognising they are well educated, well rounded,” she says.

Communication is another strength that Irish people have. “Most Irish people know how to talk to strangers and are very good at that and can present themselves very well.”

She has found that being Irish is very positive: “When you say you are Irish it brings a smile to people’s faces”.

Despite living in the US for over 30 years, there are many things Tempany-Afdhal misses from Ireland, particularly “the sense of humour, the wit of the Irish”. She is very comfortable in her adopted home but when she comes back, she loves when “someone makes a crack or a comment– you can communicate easily and freely”.