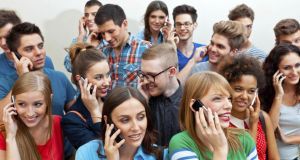 Generation Y: hiring and managing those born between 1981 and 1995 could be like parenting – you have to constantly show them the paths

“They watch 208 channels on TV, surf the web and talk to five friends at the same time . . . and they’re still bored,” Halogen Software vice-president Phil Rugani says of Generation Y, those born between 1981 and 1995.

Speaking at the Halogen talent summit in Dublin recently, Rugani said hiring and managing Generation Y was essentially like parenting – you have to constantly show them the paths they can take.

“If managers don’t have a conversation about the future and where their employees’ careers are going, the employees are gone, and they’re gone to companies like Google without having a clue what a job there involves.”

Rugani says that when dealing with Generation Y, mangers should say “here’s where I see you in five years,” instead of asking the employee where they see themselves.

He said most employees come to work every day without knowing what the company is trying to achieve, and this has negative effects on businesses.

“Organisations need employees to be aligned with their business goals. Generation Y want to feel like they are making a contribution towards this goal, but most have no idea how their job impacts the company.”

Dr Mary Collins of the RCSI’s Institute of Leadership told the event that the challenges in the modern workplace are as a result of misunderstanding between generations.

“Currently we have four different generations working side by side in the workplace, but by 2020, there will be five generations all working together and by 2025, Generation Y alone will comprise 75 per cent of the global workforce,” Collins said.

Sharing research conducted for her doctoral thesis on the changing landscape of the workplace, she said the maturists (born before 1945) and the baby boomers (born between 1945 and 1960) still believe in “a hard day’s work for a hard day’s pay”, but Generation Y has abandoned this traditionalist view of the workplace.

“They want to work with companies rather than for them, and they will move jobs between 15-20 times throughout their careers in order to find the right fit.”

Collins spoke of the importance of keeping Generation Y engaged, saying that “the most engaged employees are 87 per cent less likely to leave a job and are 20 per cent more productive in the workplace”.

She says that something as simple as a manager sending an employee to a conference that they think would benefit the employee can totally influence how long an employee stays with a company, as it shows that the manager is taking an interest and cares about the employee’s future.

Generation Y, says Collins, are entrepreneurial thinkers who relish responsibility, hate micro-management and are very concerned with corporate social responsibility. They want to work for a company that will meet these needs.

“Generation Y also want people from the baby boomers generation to manage them or be their mentors. Why? Because they remind them of their parents and 92 per cent of them name their parents as their best friends,” Collins says.

She told the audience of a 2013 Harvard study of 15,000 millennials – those reaching young adulthood around the year 2000 – which found that Generation Y wants companies that nurture their leadership skills, foster innovation and make a positive contribution towards society.

The Harvard survey also found that 75 per cent of millennials said that the most important thing when picking a place to work is how well they feel they would fit with the people and culture. Some 65 per cent listed career potential as the most important factor and also said that a work-life balance was vitally important.

Compensation was further down the list, showing that Generation Y has abandoned the traditionalist view of simply working hard to earn money, in favour of a more rewarding career path.

The 15,000 university students surveyed listed Google, Apple and Facebook as the top three companies in which they hoped to work. For Generation Y, work needs to be fun, social and collaborative. Companies like Google are the dream, as they give employees a lot of scope to work more flexibly and to easily collaborate with teammates in a fun environment.

In a similar survey conducted by GradIreland in January of this year, 7,778 students and graduates of Irish universities were surveyed about their attitude to the future. Questions asked related to globalisation, mobility, career flexibility and how optimistic they were about future career prospects.

When asked if they thought they had a better chance of finding a job thanks to globalisation, 52 per cent of the total surveyed said yes, and 77 per cent of high-potential students also agreed. Fifty-nine per cent of business students/graduates said they would consider moving abroad for work, in comparison to only 9.9 per cent of technology students, something Mark Mitchell of GradIreland said may be an indicator of the rising tech scene here in Ireland.

Mark Mitchell, the publisher of the survey, says “the future of work is about the future of our society”. “We need to look at what the Irish workforce will look like in the next five to 10 years in order to successfully manage that change,” he adds.