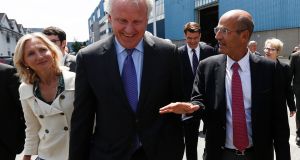 France’s traditionally male-dominated companies are scrambling to appoint women to their boards in time to hit ambitious legal quotas on female representation by next year’s deadline.

Women account for 28 of the 44 board appointments that the members of the CAC 40 index have so far proposed for approval at their general meetings this year, according to proxy adviser Proxinvest.

But competition for strong candidates is fierce: Clara Gaymard, who was until last month the head of General Electric in France, accounts for three of the 28 appointments, at Danone, LVMH and Bouygues. She already sits on Veolia’s board.

And in a clear sign that France’s most prominent companies are looking further afield, more than half of this year’s female appointees are foreign.

A 2011 law requires the CAC 40 boards to have women account for at least 40 per cent of their members by next year. Right now, the boards are collectively at about 35 per cent.

But head hunters say that competition for female non-executive board members is intensifying as the deadline gets nearer.

“There’s a scarcity of obvious candidates,” Marc Sanglé-Ferrière, country head of Russell Reynolds Associates in Paris, said. “This year is defining and it’s difficult to find senior female leaders because many of them have already been recruited.”

“It’s getting harder,” said Lorraine Kron du Luart of Eric Salmon & Partners. “All the board-member recruitment we have done recently has been women. If you are a man and you are looking for a board position in France, well, you are out of luck.”

Companies failing to meet the minimum quota by next year will not be allowed to make changes at the board level that do not contribute positively to meeting the target.

French business has been ahead of some European competitors on this issue. According to Russell Reynolds Associates, 30 per cent of board members at the country’s leading companies in 2014 were female, compared to 25 per cent of leading UK companies were female and just 19 per cent in the case of Germany’s blue-chip companies.

Just 8 per cent of French board members were female in 2006.

But head hunters say that they have had to look increasingly beyond France’s borders to meet the looming quotas. “We went looking all over the world,” said Brigitte Lemercier of NB Lemercier & Associes. “We went everywhere.”

About 30 per cent of all board members of the country’s biggest companies are now non-French.

About 30 per cent of all board members of the country’s biggest companies are now non-French.

“We will have to be a little bit more creative,” he said. “It is going to require finding talents that are not so obvious.” Mr Sanglé-Ferrière said that solutions would likely come not only from abroad but also non-traditional sources such as government and academia.

One consequence of the shortfall is pressure on the low salaries – about €60,000 a year – that board positions typically command in France. “This year, for the first time, I met women asking me the question about salaries,” said Mr Sanglé-Ferrière. “It is starting to matter.”

Head hunters warn that it will be even harder for companies in other countries if and when they move to increase the ranks of female board members.

“It is an advantage to be the first mover,” said Mr Sanglé-Ferrière. “France is at the forefront of this revolution, and it has really started to change the landscape.”

Ms Lemercier of NB Lemercier & Associes agrees. She also argues that women’s presence in the boardroom has a double effect: first, they take the role very seriously; second, they have an effect on the men.

As she puts it: “In France, we always say that when women are in a meeting, the men act more intelligently. And I believe that.”