A rate of €230 a week will be paid, bringing Ireland into line with other EU countries 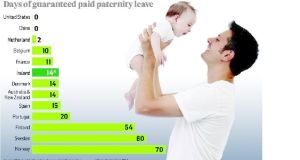 From next autumn, fathers will have the option to apply for two weeks’ paid paternity leave following the birth of their child. The new provision was announced in last month’s budget and has been celebrated as a step forward in recognising the needs of modern families in Ireland.

The paternity leave scheme will come into effect in September 2016, after legislation for the entitlement has been passed through the Dáil and an IT system has been set up to deliver the payment.

Until now, Ireland has been behind the majority of European countries in its exclusion of paternity leave from employment law. New fathers typically used days from their annual leave, but this could be granted or denied at the employer’s discretion.

The new statutory paternity leave will be paid at a rate of €230 per week, the same as maternity benefit, and based on the same PRSI contribution requirements.

Minister for Children James Reilly has said the two weeks of paid leave will be “a step along the road to shared paid parental leave”. The introduction of a year’s paid parental leave to be shared between mothers and fathers has also been proposed by the Coalition, based on a review established by the Minister.

Director of HR organisation CIPD Mary Connaughton says she would like to see more flexibility to allow couples to distribute their leave.

“Currently, the mother has 26 weeks’ paid leave and the father will now have two which is a total of 28 weeks’ paid leave, so ideally they should have more options in terms of controlling how they distribute that leave,” she said.

Postal worker Paddy Behan from Maynooth has four children and was given three days’ paid leave from An Post when his wife Kate gave birth three months ago.

He thinks the legislation for two weeks’ paid paternity leave will be “a big help for anyone from now on”, but that a shared parental leave arrangement would be ideal.

“Kate was exhausted after having the baby and I needed the time off, especially with the other three kids, to bring them to school and to do things around the house”.

Behan took an additional two weeks’ holidays out of his annual leave after the birth.

“Even at that it was fairly busy,” he says. “The three days was a big help but I definitely don’t think it’s enough. “If the person has a Caesarean section, they’re not allowed to lift heavy things or drive for six weeks, so a couple of days isn’t a whole lot for anyone who might have to do the bulk of the work.”

She says the two weeks’ paid paternity leave is “more positively received” by employers than the proposal to move towards a system of one year shared parental leave similar to that in the UK.

“It’s much more straightforward and practical,” she says, adding that shared parental leave would be “much more complex to introduce and certainly much more difficult for a lot of businesses”.

“People are willing to take an opportunity that might be nine to 12 months, but are much less likely to move for maybe a two-month contract,” McElwee says. “That’s much more difficult for companies to manage, and administratively it’s much more challenging to be able to share leave, so that would add to the cost burden for it.”

Since 1998, a separate provision for parental leave has been available to both mothers and fathers for up to 18 weeks for each child under eight years, but the uptake in Ireland is significantly low as it is unpaid.

Director of the Small Firms Association Patricia Callan says the uptake among men is below 5 per cent.

“International evidence would show that there are issues around taking long periods out of work and men feeling that that would disadvantage them and not wanting to do so,” she says.

“The world moves on very quickly and in the space of a year or a number of years, you really have to upskill to get back into that, and I don’t think men are prepared to do that.”

Callan also believes it will be harder for SMEs to adapt to the new leave arrangement.

“If you have four people and one of them is gone, that’s 25 per cent of your workforce,” she SAYS. “In terms of covering for people, there is definitely a bigger cost to smaller companies.”

The government there has said it believes that extending the system will benefit single mothers, who did not have the option to share parental leave before now.

CIPD director Connaughton says time off for grandparents is unlikely to be included under the paternity benefit scheme in Ireland, although she says “some organisations do provide an extra day of grandparent leave on the birth of their grandchild”.

She says businesses should begin to draft a paternity leave policy in preparation for the legislation, which should clarify the process involved in applying for paternity leave including the notification period required from employees.

Connaughton says the majority of employers provide a top-up of maternity leave payments, whereby a company makes up the difference between the State payment and a person’s normal pay.

“From an equality and equity perspective, these organisations will need to examine a similar approach to topping up the pay of male employees in receipt of the State paternity benefit,” she says.

Connaughton believes the introduction of paid paternity leave is something we should have moved towards a long time ago.

“We’ve been way behind on paternity leave, so this is probably just bringing us in line with the minimum in countries around Europe, but it’s good to see it finally come into effect in Ireland,” she says.

1 Admission of mistake in Oxford vaccine dose raises doubts over reliability
2 Move to EU or face disruption, City of London is warned
3 Cliff Taylor: Deal or no deal we are now heading for a hard Brexit
4 Last orders for Rí-Rá and Globe as Central Hotel gets green light to expand
5 Karlin Lillington: How I managed to cut my mobile phone bill by at least half
6 Fiona Reddan: Who’s afraid of Revolut? Not AIB and BOI it seems
7 An Post parcel volumes to hit weekly record of 3.3m
8 Lahinch Golf Club runs out of its own cash after €3m Covid-19 hit
9 German watchdog reports EY to prosecutors over Wirecard audit
10 Irish Life fund pays €49m for 94 Dalkey apartments
Real news has value SUBSCRIBE