Emma McIlroy: ‘I remember holding the letter of resignation in floods of tears’ 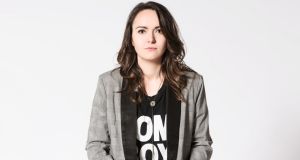 Emma McIlroy: “Building a start-up is the hardest thing I’ve ever done.”

Emma McIlroy has never been averse to challenge. The Northern Irish native and CEO of Wildfang, a clothing and lifestyle brand based in Oregon, is a former 800m runner for the Irish team and played hockey for Ireland.

She left a six-figure salary at Nike to set up Wildfang with her colleague Julia Parsley out of a desire to bring a distinct “tomboyish”, “badass” aesthetic to female consumers. And when she’s not heading her business or coaching young women running, she’s writing children’s books including Emma’s a Gem – a book about a problem-solving little tomboy.

Wildfang is a two-year-old, multimillion dollar, American clothing and lifestyle brand based in Portland that boasts a unique tomboy style, a growing celebrity fan base, two bricks-and-mortar stores, 17 employees and a growing consumer reach online. Self-funded to the tune of $100,000 between them, McIlroy says that her and Parsley’s investment “bought the first round of product and built the website”.

“Neither of us took a salary for the first 16 months so we lived off that for a while.”

The two women have seen their original investors stay with them too. And those investors are no small fry either. “We have people like Tony Hseih, the CEO of Zappos – an exceptionally successful man,Glenn Krevlin [of Glenhill Capital] a sophisticated retail investor who was chairman of the board of Design Within Reach... a lot of successful people who have made money in retail but who didn’t necessarily know how to build a brand. Given myself and Julia’s roots, there are also senior Nike people who have money in the business,” she says. McIlroy moved to the US in January 2008 to work with Nike after a year with the company in London. She had previously worked at Barclays selling business banking products before “jumping into Barclay’s Premier League Sponsorship Team” – a role which saw her “focus on a product and consumer [she] adored”. “I then met a guy who’d taken over at Nike Running who said they were looking for female marketers and next thing I knew I was in Portland, Oregon.” [Nike’s HQ is just outside the city].

Nike Running was a great fit for the Larne native who ran 800m for Ireland and played field hockey for her country from the age of about 13 to 19. “My brother James McIlroy was much better than me though. He ran 1:44.65 for 800m and 2:15 for 1000m which put him into top 10 in the world at one point. I watched him in the Olympic semi finals and Commonwealth games final – a very proud little sister,” she says.

At Nike, McIlroy worked in the role of brand manager at Nike Global Football and Running before going on to be promoted to product marketing manager, digital sport, where she worked under head of digital sport Stefan Olander before leaving to set up Wildfang. “I remember holding the letter of resignation and I was in floods of tears but the moment I let go of that letter it was a great feeling. I left a lot behind – a six-figure salary, flying around the world and so on, but building a brand is what I do best.

“I want to build something with an emotional connection, to create something that will inspire people. That’s what I did at Barclays and what I did at Nike and they’re probably the best in the world at it. That’s why there are certain companies that you care more about than others,” she tells me over Skype while her cat prowls on the sofa behind her.

“It was an incredible degree that taught me a new way of thinking and a new way of problem solving. I spent a tonne of time thinking about behaviour and memory and how other people think and act – which is pretty important to being a marketer,” she says.

The young entrepreneur also credits her sporting background with her ability to persevere through the tough times. “A lot of my competitive drive and work ethic probably came from that. The most useful thing it taught me was to go through the hard times. You don’t feel great at every session on the track but it leads to something bigger and knowing you can go through hell is a unique skill set,” she says.

She now regularly meets “people who haven’t quite made the leap yet” in Portland to offer advice. “I think anyone who is in the position I’m in knows they got a lot of help along the way and, if you don’t pay it back.”

Still a lover of running, she’ll train two or three times a week and helping to coach young women is a “simple idea of paying it forward”.

“I’ve had so many people who’ve looked after me from my parents to sports coaches to all the people who’ve helped us with this business giving us their nights and weekends. Building a start-up is the hardest thing I’ve ever done but it is also a privileged position because I’m doing something really exciting. I feel I have a job to give back.”

McIlroy gets home once a year for Christmas and says it’s the people she misses most about Ireland. She says that the US is a can-do place that allows people like her to do well. Hustling and self-belief are key to her success, she laughs. “We joke that when someone shuts a door Wildfang opens a window.”