Emigrants urged to bring their skills back home

As the economy recovers, employers are hoping to tempt emigrants back to Ireland for good 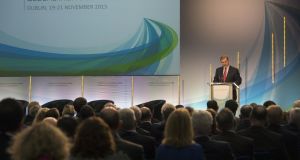 Things have changed radically in the employment sector since the recession forced thousands of Ireland’s brightest to move abroad in search of work. Many of those individuals are now happily settled into new careers overseas, but with the Irish economy getting back on track, employers here are hoping to tempt some back for good.

An advertising campaign to encourage emigrants arriving home for Christmas to consider returning to live and work here permanently was recently announced. The Government initiative, which is also backed by many of the State’s biggest employers, consists of a series of posters and advertisements that will be displayed at airports across Ireland.

The ads, which all carry the #hometowork hashtag, have met a muted response from emigrants, judging by comments left by users of the Irish Times Generation Emigration blog and forum.

Nonetheless, with as many as 1,000 jobs being created each week and with skills shortages emerging in many key industry sectors, the Government and employers realise encouraging foreign nationals to plug gaps by relocating here isn’t enough.

According to Mr Kenny, 2016 will be the first year since 2008 that the number of Irish people returning from abroad would outnumber those leaving. But with the Taoiseach targeting the return of 70,000 emigrants between now and 2020, Ireland Inc has a job on its hands trying to sell the benefits of the place to those who have established comforting careers abroad.

“I have not seen such efforts to attract the diaspora returning for Christmas since 2000,” said Adrian McGennis, chief executive of Sigmar Recruitment. “Many businesses, recruiters and the Government are investing in initiatives to capture the homecoming Irish and encourage them to apply for roles in Ireland.”

According to McGennis, the sectors most in demand at present include IT, accounts, financial services, construction and sales.

One of the Ireland’s leading IT employers, Microsoft, announced earlier this month that it was looking for 160 new staff. That number includes 60 interns but there are 100 roles for experienced and skilled staff.

“Several organisations are targeting signage at the airport. Press, radio and probably television will be used extensively over the holiday period, but social media will be the most-used medium to attract these potential candidates. There are lots of clever campaigns targeting specific skills through focusing on the relevant digital channels,” McGennis added.

“The Christmas season, when thousands of emigres return home to visit their families, provides an excellent opportunity for companies to target those looking to return for good. In terms of job-searching trends, we traditionally see a spike in searches for new roles just after Christmas, which is partly driven by emigrants who are looking at whether a temporary visit home can become permanent,”

“Certain industries are making it easier for people to return. For instance, in healthcare you have seen the introduction of repatriation packages for nurses, and many private-sector firms will offer generous relocation packages to tempt the right person to come home,” he added.

Companies in the tech and digital space have long warned of a shortage of skilled personnel in Ireland with some warning that unless the issue is addressed, economic recovery may come to a halt.

Indeed, which itself recently announced plans to take on more staff in Dublin, is also looking to target those back home for Christmas.

“We’ve recently announced plans to more than double the size of our Irish team, adding 300 new staff by the end of 2017. For many roles we will provide a relocation package for international candidates who are coming to Ireland, and that would include helping Irish emigrants who may have left in the downturn but now want to come home,” said Mamertino.

Construction, arguably the worst-hit sector during the recession, is among those industries now in serious need of employees.

Recent employment figures show that of the 56,000 people who recently left the Live Register, 15,000 (or 26.7 per cent) were from the construction sector. Anne Cleary, director of communications at the Construction Industry Federation (CIF) said many of those workers who held qualifications and were experienced had picked up employment. CIF’s priority is currently on upskilling people still on the register and in helping employers overcome obstacles to taking on apprentices.

“The availability of qualified tradespeople is an issue that is likely to impact on the recovery as it accelerates. There are certain skills in huge demand, including quantity surveyors, engineers, project managers, steel fixers, plant operators, welders, glazing specialists, bricklayers and joiners,” she said.

“We actively support the Government’s campaign to get people home, particularly as the construction industry was the most directly and severely impacted by emigration. The return of these people would assist in securing the sector’s ability to deliver the plans and projects required to support the country’s recovery.

“The message needs to go out that this is a stable industry, and government and business can play a central role in proactively telling that story,” Ms Cleary added.

Engineers Ireland, which represents 24,000 engineers, agreesthere is significant demand for highly skilled employees to meet the demands of an expanding economy.

“Civil engineering graduates are set to be in high demand as the numbers qualifying are so low. Employment opportunities for Irish engineers have also increased in industries such as ICT, medtech and energy. In many cases employers are actively seeking to retrain or upskill engineers to address employment gaps in these industries,” said Engineers Ireland director general Caroline Spillane.

“Irish companies have for some time now also been engaged in overseas recruitment drives in a quest to find and attract highly skilled engineers to work in Ireland. Companies here are actively targeting Irish engineers who return home for Christmas via adverts in in- flight magazines, radio advertising and website advertising. In recent years there have also been specific career fairs in the period between Christmas and the New Year,” she added.

One of Ireland’s biggest success stories in recent years has been the pharma sector, which now employs more than 24,500 people directly, with an equivalent number employed providing services to it.

“There are skills shortages in the sector and it has happened very quickly. There’s a lot of positions available and we’re forecasting around 3,000 positions over the next couple of years should be created,” said Matt Moran, director of the Ibec-affiliated PharmaChemical Ireland.

“We’re trying to encourage the Government to do more to help get Irish people back here for good. Companies are looking hard for people and it is becoming much more difficult so scouting overseas would be a viable options for us if we can get the people to come back and stay,” he said.

His views are echoed by Liam Murray, head of HR for MSD in Ireland, who outlined the way the company is looking to encourage Irish people back home.

“We continually use the MSD global network to reach out to the Irish diaspora who might have started their careers in MSD Ireland – many of whom will return home at Christmas – to ensure that they’re aware of opportunities in our Irish operations,” he said.

Professional-services firms may not be struggling as hard as companies in other sectors, but there’s still a need to take on staff. PricewaterhouseCoopers (PwC), which earlier this month announced plans to hire an additional 500-plus staff, is among them.

“Like many organisations, securing the right talent remains a key challenge and it is something we are investing significant time and resources in.”