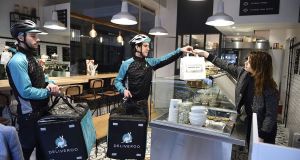 Bikers working for food-delivery service Deliveroo enter a restaurant to pick up meals they will deliver in Paris. Photograph: Eric Feferberg/AFP/Getty Images

Digital platforms that use crowdsourcing to get the people they need to provide services such as riding, sharing and food delivery have proliferated over the past decade. But the cracks are beginning to show. Governments, the courts, individuals and academics are increasingly questioning how these platforms are run, especially when it comes to the way people are treated.

The phrase “humans as a service” was coined by Jeff Bezos, chief executive of Amazon (which has a platform called Mechanical Turk) and, over the past few years, Oxford University law professor Jeremias Prassl has dug deep into what it really means.

“This crowdsourcing of work has had a profound impact on traditional conceptions of employment relationships,” he says. “The completion of ‘tasks’, ‘gigs’ or ‘rides’ in the [digital] crowd fundamentally challenges our understanding of work in modern labour markets. Gone are the stable employment relationships between firms and workers, replaced by a world in which everybody can be ‘their own boss’ and can enjoy the rewards – and face the risks – of being independent businesses.”

Prassl is no Luddite. He is very much in favour of innovation and the opportunities that digital platforms present. He just doesn’t like how many of the platforms behave.

He also scotches the notion that the platforms facilitate entrepreneurship to anything like the extent the hype suggests, and he has major reservations about the fact that crowdsourcing environments are not subject to labour law.

On top of this, those earning a living in the crowd have to accept low pay, uncertain hours, a high level of control and the possibility of being summarily dismissed.

“Is this the future of work and is the crowdsourcing economy really so fundamentally different from existing work arrangements that it should fall outside the scope of employment law, as many providers claim?” Prassl asks. He takes the view that it should not. “It is work and should be regulated as such. These platforms have a lot of potential, but those operating them should play by the same rules of everyone else and as of now they don’t.”

It is work, a fact being increasingly recognised by courts around the world that are refusing to be fooled by carefully designed contractual euphemisms

Prassl says this is not just a problem for crowdworkers. It is one for “traditional” workers and businesses everywhere.

“The platforms don’t pay social insurance and their people generally earn so little that they don’t pay VAT. As a result, other taxpayers end up subsidising them,” he says.

“Regardless of what they call what people do – gigs, tasks, rides – it is work, a fact being increasingly recognised by courts around the world that are refusing to be fooled by carefully designed contractual euphemisms. For example, workers are not hired and issued with a uniform, they are onboarded and sold an equipment pack or they sign a document setting out performance targets that’s referred to as a supplier agreement, rather than a contract of employment.”

Prassl has little time for the widely held view that these platforms are somehow different to what has gone before when it comes to how people are recruited.

“The platforms position themselves as the middleman and in that they are no different to the foggers who rounded up men for work in the docks many years ago,” he says. “There is also nothing new about how they allocate tasks or hours. People have lived with piecework, zero hours, sub-contracting and outsourcing – all of which are variations on a theme – for a very long time. The platforms are just at the sharper end of the practices.

“It is also somewhat wide of the mark to suggest that this flexibility offers freedom,” he adds. “In fact, it makes for great uncertainty with a lot of control being exercised over how people work. For example, some platforms take screen shots every few minutes to make sure people are doing what they should be doing, others use apps to track where people are and how they are behaving.

“The platforms are constantly experimenting with their algorithms to optimise their business model, but for the humans providing the service this means they can’t plan for the future or get a mortgage and they have to absorb costs such as owning a computer or a car.

“Finally, some platforms pay so little that there are frequently problems with the service provided, but if something goes wrong they say they are ‘only intermediaries’, and step away.”

If they move to a new platform, they have to start over and that is a big disincentive. I would like to see the rating became the property of the individual

In Prassl’s view, the time has come for the platforms to face the same work and employment regulations as everyone else. He also believes that pay rates need to be looked at and a dual rate introduced to help offset some of the insecurity.

“The minimum wage could apply where hours are more stable with a higher rate applying for more uncertain hours,” he says. He also wants the difficulty people face trying to move platforms addressed.

“Platforms typically have a rating system and people work hard to build up their rating,” he says. “But if they move to a new platform, they have to start over and that is a big disincentive. I would like to see the rating became the property of the individual.”

Prof Prassl will be speaking at the Future of Work conference organised by the Department of Jobs, Enterprise and Innovation at Dublin Castle on May 12th. His book, Humans as a Service, will be published by Oxford University Press in the autumn.