Dealing with disruptive behaviour is crucial part of good management 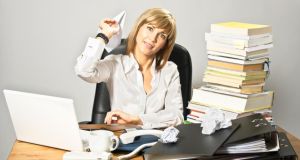 Often employers are to blame for dissatisfied workers, but few of them look to do anything about addressing the issue unless they have to

We’ve all had experience of working alongside people who have fallen out of love with their job.

Blame it on the boss, the role, the unsocial hours, the long commute or even co-workers, whatever. But putting up with those who wish they were elsewhere isn’t easy.

From rudeness and time-wasting to a refusal to co-operate, bullying and aggressive behaviour, the list of disruptive techniques employed by those who hate their jobs is ever-expanding and, if not stopped, can cause widespread problems in the workplace.

According to new research published by the Chartered Institute of Personnel and Development (CIPD), one in three employees in the UK has experienced some form of interpersonal conflict at work in the last year, with many incidents involving individuals who are frustrated in their roles and want to leave.

Dealing with these people can be very difficult for managers and co-workers alike.

The CIPD is so concerned it has warned employers of the role they need to play in defusing tensions early on so as to stop problems escalating and affecting morale and productivity.

While personality clashes are unavoidable, there are many instances where companies have been responsible for causing disharmony in the workplace themselves, either by hiring the wrong people for roles or because they haven’t done enough to keep staff motivated.

“If a company has a large number of people who are dissatisfied and not performing to the level that an employer would expect them to, then it’s obvious that something has gone awry. You’d need to question who took these employees on and whether there was proper thought put into how they would be employed over the long term,” Buckley says.

“When problems arise, it’s usually often more as a result of a systemic issue than the fault of individual staff members.

“Employers often take on people for the short term because they want them to do a job that exists today without thinking how they’ll employ those individuals in five or 10 years’ time. It is the responsibility of an employer to assess whether a role will change over time rather than hiring people to do something right now,” Buckley says.

In every organisation, there are going to be staff members who are miserable, according to John Deely, an occupational psychotherapist and founder of Dublin-based career coaching firm Pinpoint.

“Even with the best efforts, there will be people who are unhappy. According to the Gallup organisation, 13 per cent of employees worldwide are engaged by what they do, 63 per cent are not and 24 per cent are actively disengaged, which means they are working against the organisation that employs them,” Deely says.

“While the 63 per cent are in play to be engaged, the challenge with the latter group is that it takes a significant effort to shift their mindset and get them onboard again,” he said.

“How the issue is managed can vary depending on the culture and the HR practices. Jack Welch in GE famously advocated firing the bottom 10 per cent of his managers each year; in other organisations, and particularly in the public sector, the culture of firing people is practically non-existent.”

“Disruptive employees often become that way because they are disengaged with their work and feel no sense of ownership over it. You’re always going to have at a minimum around 4 per cent of staff who are wandering in and out in terms of their commitment to work. Employers need to be aware of who these individuals are and seek to get them onboard again by reminding them of the deal that both sides have,” Barry says.

“Much of the time, however, companies fail to tackle the issue, which means that things can get worse instead of better.”

Gearóid Hardy, an adjunct lecturer in the UCD Michael Smurfit Graduate Business School, says disruptive behaviour, whether by senior staff members or junior employees, needs to be tackled as early as possible.

“An organisation’s failure to tackle disruptive behaviour can have a stronger negative impact than the original activities. It can go on to affect customers and their level of satisfaction with an organisation,” Hardy says.

“It’s important to acknowledge that there will be people that any organisation will struggle to keep happy and this needs to be accepted. In these cases, it is the duty of the organisation to colleagues and customers that those people are actively managed to minimise the negative impact they might have.”

“A company should have a clear definition on what disruptive behaviour is. It is not unusual or unorthodox behaviour, it is conduct that interferes with the effective operation of the business or suggests a threat to fellow staff members or customers,” he says.

While noting that regular performance reviews can be useful in helping to spot issues, he says there’s no point holding on until a mid-year review to resolve problems that are happening in March.

He says that in the case of disruptive behaviour by managers, employees may be afraid to speak out and senior staff may be required to step in to resolve conflict.

Bill Roche, professor of industrial relations and human resources at the UCD Quinn School of Business, agrees that performance management can be a useful way to monitor employee satisfaction levels.

He says, however, that if chronic underperformance and related problems persist, they should be tackled through disciplinary procedures, but adds that the two processes should be kept distinct.

“Performance management should not be used as a means of disciplining people,” he says.

Hardy says that sometimes just pointing out to people the effect they are having on their co-workers can be enough to help address disruptive behaviour. He also believes the “brief, informative, friendly and firm” (BIFF) ) model can be very helpful in challenging negative actions.

“The technique provides a way to frame a conversation based on observed behaviour, the impact that it is having, how people feel about it and what needs to be done to move things forward,” he says.

He adds that whether they like it or not, organisations have a duty both to their staff and customers to address disruptive behaviour in the workplace.

“We have to be able to have those difficult conversations and call things as we see them, even when we feel uncomfortable doing it because we have a duty of care to understand why some people behave as they do and how to deal with the consequences of that behaviour at work,” he says.