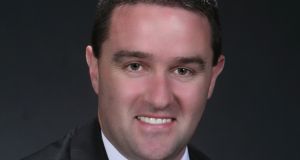 As a secondary school student, Alan Walsh was torn about whether to study music or physics at college. He had played the cello all the way through school, and was in several orchestras. He loved music and being part of the Cork School of Music.

However, he also had an interest in physics.

“I ended up doing physics on the advice of the music professor at UCC. I sat down with him, and he asked if I wanted to teach music for the rest of my life.

“I said absolutely not. His point was that musicians nearly always have to teach music to supplement their income. So I did physics.”

Walsh started in Cork Institute of Technology in 1992, and studied for a certificate in applied physics.

“It was quite a practical course, which suited me. I learn better by doing. I am not so good at the academic side of things,” he says.

He worked in Brookfield swimming pool in Cork after college.

“There were few jobs in Ireland when I finished college in 1994. I had worked in Brookfield during college so was able to get a job there.”

One of the Brookfield clients recommended him for a job at EMC.

“I used to train with someone who worked there. He recommended me. I got an interview on a Wednesday and started work there the following Monday.”

At the time, EMC had just 300 employees in Ireland. He worked on the manufacturing side, putting components of products together for EMC’s Symmetrix storage device, and then testing the products.

“We would have to fly to different places in Europe as EMC didn’t have a huge amount of technical support throughout Europe at that time.”

He was also involved in the company’s preparation for the millennium, and any problems that might occur in the aftermath of the clock striking midnight.

“We knew 14 or 16 hours ahead of time that the millennium wouldn’t impact us in Cork, as it hit New Zealand and Australia first and had no impact.”

He later became a senior director of escalation management at EMC. He spent almost three years in that role, responsible for managing the resolution of the most complex customer problems, in order to maximise customer satisfaction.

He was responsible for customer engagement related to EMC’s account management services. He worked directly with senior EMC executives and customers to address concerns and enhance customer relationships.

“If any customer had a problem or challenge and they contacted EMC, they came through my team.”

Walsh then got the opportunity to undertake a more proactive role focused on the top 200 revenue-generating customers.

“We built a programme of free giveaways to build relationships with those customers, and drive more revenue into the company.”

Alan relocated to Boston in 2007. He says there is a huge amount of optimism about living in the US, nothing is impossible there.

“There are four actual seasons in Boston. The most recent winter was the worst I’ve ever experienced. We had eight feet of snow, and hibernated for two months. I couldn’t let my kids out in the garden for fear I wouldn’t be able to find them.”

Walsh took over EMC’s VNX product portfolio in 2011, looking after it for two years.

He is currently vice-president of customer service at EMC in Boston. In that role he helps companies fix technical problems relating to EMC’s products, and helps protect the company’s brand.

Dell announced last year it was acquiring EMC in a $67 billion deal, sealing the world’s biggest tech merger. Walsh says that it is too early at this stage to tell if there will be any impact on his role.