Carving out a niche means having the best of both worlds 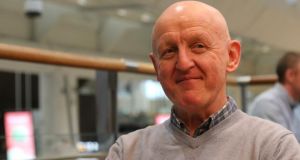 Phelim Rooney: “They had no understanding of the expertise needed to do something in the sea”

Phelim Rooney specialises in pipes. Not the kitchen variety, but 400 metre-long jumbos pumping millions of euro worth of oil from the bottom of the sea on platforms located around the world.

Originally from Ballyshannon, Co Donegal, Rooney has been based in Norway for the past three decades. After 10 years of doing project-based work with companies ranging from Conoco to Norway’s Statoil, he decided to hire himself out as a freelance consultant.

“I thought: I’ll do it my way,” he says, with a perceptible Nordic lilt in his Donegal accent. The gamble paid off. Within the first year, he had doubled his earnings.

Rooney started his career on land. He graduated in civil engineering – “everything from sewerage to skyscrapers” – from University College Galway in the mid-1970s. His first job was inspecting fertiliser factories for a Dutch company in Cork.

But it soon became clear that offshore was the place to be. Rooney went on to specialise in offshore engineering at Cranfield Institute of Technology in the UK.

He returned home for a spell to work for the Dublin-based Institute for Research and Standards, which was developing certification norms in anticipation of the boom. But, unlike the UK and Norway, the boom never came to Ireland. So the institute sent Rooney to work in Norway with partner company Det Norske Veritas, “more to keep me busy than anything else”.

He loved the experience, but being on expenses in one of the most expensive places in the world could last only so long.

“The social life was great, but the work wasn’t interesting,” he says. During this time, he was also corresponding with a girl he had met in Oslo. Soon, he was back in Norway, happily “hitched” and working for Det Norske Veritas, Aker and Conoco.

Being a project-based worker, he found himself changing employers quite often.

“There was no need to have company loyalty,” says Rooney. His job required a lot of shopping trips, to places such as Japan and Houston, the oil industry’s Mecca.

It was after a stint working for Conoco that he began to tire of being an employee.

“Most of the staff were Texas oilmen with their snakeboots. They hadn’t done their time offshore and had no understanding of the expertise needed to do something in the sea.

“It would have been nice to walk away from that job after a couple of months. But I was stuck in many ways,” he says.

After three years of grind, he went back to Aker, which was preparing to rent out his pipe-building expertise to Statoil. Rooney decided it was time to take his destiny in his own hands.

“It’s a win-win situation,” he says. “I don’t have to go out there selling my services. And I get 92 per cent of what they invoice. It’s a good combination of being in a working environment and earning lots of money.”

For the past few years, there has been great demand in Norway for foreign engineers. But with oil prices plunging, that trend is now slowing. As the rigs get older, however, there remains a big market for maintenance and repair.

“That’s where old boys like me are useful,” says Rooney. “Sometimes I have to go back and work on something I worked on 20 years ago.”

Being an “old boy” also means Rooney has had time to build himself a network of industry contacts, many of whom have set up their own companies. It was one such contact who had him working a year in Houston and flying back to Norway every two weeks.

Now 60, he hopes to carry on for a few more years. He is also looking forward to having more time to devote to his first love, theatre – in Norwegian.

“They tease me. They say I can’t roll my Rs!” he says of his fellow thespians, again in his unique accent, somewhere between Oslo and Ballyshannon.