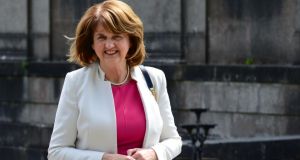 Tánaiste Joan Burton: said that any PRSI anomalies arising from the recommendations in the Low Pay Commission report would be addressed in the forthcoming budget. Photograph: Dara Mac Dónaill

The Unite trade union has urged the Government not to reduce employers’ PRSI to compensate for a planned increase in the national minimum wage.

He said Unite had consistently argued that employers’ PRSI should be raised to finance a “social wage”– which he described as the kind of social insurance-based services that workers in the rest of Europe took for granted.

Ministers on Tuesday signalled that reforms to PRSI would form part of a package to be introduced in the budget in October which would see the national minimum wage raised by 50 cent to €9.15 an hour.

“Piling on another subsidy is not the way to address the scourge of low pay,” Mr Kelly said.

The Low Pay Commission, which proposed a 50 cent rise in the national minimum wage, in a report on Tuesday pointed to anomalies in the PRSI system which could see workers actually take home less money and employers having to pay significantly more in social insurance contributions if an increase brought salary levels above certain thresholds.

Tánaiste Joan Burton said that PRSI anomalies arising from the recommendations in the Low Pay Commission report would be addressed in the budget.

In its submission to the Low Pay Commission, Unite had called for the national minimum wage to be increased by €1 an hour.