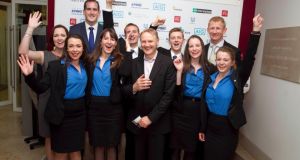 A project that seeks to match students who can’t afford to pay rent with elderly people living alone has been named the winner of the prestigious 2014 Enactus Ireland National Competition.

Generation Accommodation was created by a team of six students from University College Dublin (UCD) who will represent Ireland in the Enactus World Cup to be held in Beijing, China in October.

The winning Irish team, which is led by Aoife Buckley and comprises Roisín Lee, Constantin Lenk, Patricia Kastner, Cian O’Sullivan and Andrea Harvey, will compete against teams from 35 other countries.

Enactus is an international not-for-profit organisation that provides a platform for college students to create community development projects, while developing the skills to become socially responsible business leaders of the future.

The national competition is an annual event where students come together to present projects they have pioneered which show how they are transforming lives through entrepreneurial action.

‘Real change’ “The success achieved by University College Dublin is a strong testament to the ability of entrepreneurial action to enable real change,” said Enactus Ireland chairman Terence O’Rourke. “We were really impressed by their presentation and the way they have developed and expanded Generation Accommodation.”

Other shortlisted projects included a micro-financing scheme which works with women in their local community in Malawi and an arts group that provides classes in arts, drama and dance for people with intellectual disabilities.

“Participating in Enactus has been a fantastic experience for the whole team and it is a great feeling to be acknowledged for the hard work we put in throughout the year,” said Ms Buckley.

“We’re thrilled to present the continued success of our project, Generation Accommodation, on a global scale at the Enactus World Cup.”