Members back Government initiative to phase out lower pay rates 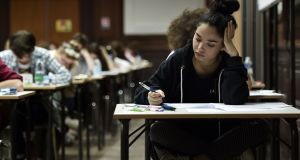 TUI president Seamus Lahart said teacher recruitment problems are evident “both across the country and across a broad range of subjects including, but not limited to, modern languages, mathematics, science, Irish, home economics and the technologies”. Photograph: Getty Images

Members of the Teachers’ Union of Ireland (TUI), have voted to accept Government proposals to end the controversial two-tier pay system in the education sector.

Union members backed by 53 per cent to 47 per cent a Government initiative to eliminate over time the lower pay rates for those recruited since 2011.

However, the TUI on Thursday warned the Government proposals would not, of themselves , deliver pay equality.

The union said the initiative would have little impact on the deepening crisis of recruitment and retention.

Last month, the Government tabled proposals to end the system of those recruited since 2011 receiving lower pay than longer-serving colleagues by allowing those affected to catch up by jumping two increments on their pay scale over a number of years.

The TUI said the proposals “do not deliver pay equality and will not tackle the recruitment and retention crisis currently afflicting second level schools”.

TUI president Seamus Lahart said: “Members have decided in a national ballot that this proposal represents another step in the campaign for pay equality. The measure will allow new and recent entrants to progress up the scale quicker.”

“However, it does not secure pay equality. There is no such thing as partial pay equality and the continuing injustice of discrimination against new and recent entrants to teaching remains to be comprehensively addressed.”

Mr Lahart said “because the discrimination is most significant in the initial years of employment as a teacher, the crisis of teacher recruitment and retention will remain and almost certainly worsen in the coming years.

“With better employment options available elsewhere, graduates will vote with their feet and schools will continue to struggle – and fail – to recruit and retain suitably qualified teachers across a range of subjects.

“As we have stated on numerous occasions, recruitment problems are evident both across the country and across a broad range of subjects including, but not limited to, modern languages, mathematics, science, Irish, home economics and the technologies.”