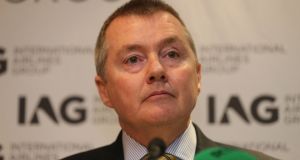 International Airlines Group (IAG) chief executive Willie Walsh, who has warned he could seek to expand the airline overseas if the Government “twiddles its thumbs” over a third runway at Heathrow. (Photograph: Photo credit should read: Niall Carson/PA Wire)

The boss of British Airways (BA) and Aer Lingus has warned he could seek to expand the airline overseas if the Government “twiddles its thumbs” over a third runway at Heathrow.

Willie Walsh, chief executive of BA’s parent company IAG, which also owns Iberia and Aer Lingus, said the firm could focus on growing its business from Spain or Ireland rather than London. His comments come after the Government announced a final decision on whether to build a new runway at Heathrow Airport has been put off until at least next summer.

Writing in the Daily Mail, Mr Walsh said: “We’re a small island, and this Government looks set to make us even smaller on the world stage. Our leaders bestride the world saying the UK is open for business, but their actions do not match the rhetoric. “If the Government continues to dither over a new runway, then I’ll move my business elsewhere. We now have airlines in Dublin and Madrid, and can expand our business there, supporting the strengthening Irish and Spanish economies. “This is not just fighting talk — we have the practical ability to expand elsewhere. This means Spain and Ireland will get the economic benefits and new jobs from our expansion plans, while the UK government twiddles its thumbs and watches as the world progresses around it.”

The Davies Commission concluded in July that a third runway at Heathrow was the best option — if a string of measures were put in place to deal with noise and pollution — but left open the option of expanding capacity at Gatwick instead. But last week, the Government said any decision had been put off “subject to further consideration on environmental impacts and the best possible mitigation measures” and announced further analysis work would be carried out. Transport Secretary Patrick McLoughlin added there was a “clear” case for airport expansion “but it’s vitally important we get the decision right so that it will benefit generations to come”.

Mr Walsh has previously been vocal about the delay in decision-making and has also criticised the projected cost of the project, which is estimated to be around £18.6 billion. The Government is assessing three options for airport expansion, which also include a £13.5 billion extension to the existing northern runway at Heathrow to form the equivalent of two runways and a new runway at Gatwick Airport, costing £9.3 billion.