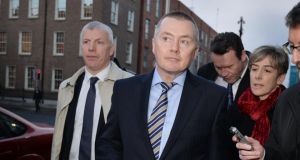 The meeting came as a number of sources in the Labour Party said there had been a shift in attitudes among some in the junior Coalition partner over the past week and a half towards selling the State’s shareholding in the airline.

Neither side commented following the meeting but it is understood the union leaders questioned Mr Walsh on the possibility of job losses at Aer Lingus should the company be taken over by its larger rival.

The airline boss, a former chief executive of Aer Lingus, indicated that any jobs that are likely to be lost will be in areas such as IT and administration. He also told them Aer Lingus would continue to manage its own industrial relations if it became part of IAG.

While the unions acknowledged there were potentially positive aspects to the deal, they remain concerned at the fact that staff whose jobs are at risk are unlikely to benefit from an expansion of the airline’s operations. Many in Labour have objected to selling the State’s 25 per cent stake to IAG, particularly TDs and Ministers in north Dublin and the midwest region.

Aodhán Ó Ríordáin, Minister of State for Justice and Dublin Bay North TD, said he “remained to be convinced”. However, a significant number of ministers contacted by The Irish Times said selling to IAG would make commercial sense and could be in the best long- term interests of the airline. Some noted it may be politically difficult to do so.

Mr Walsh has offered five- year guarantees on Aer Lingus Heathrow slots but a longer guarantee, as much as 10 years, is needed, as well as reassurances on the security of cabin crew jobs, said one Minister.

A number of Ministers also expressed concern the party could be left exposed if it objected to the sale and the unions subsequently struck a deal with Mr Walsh.

“We don’t want to be left out on a limb by the unions,” said one. “If they feel a deal is in the best interests of their members they will support it and we have to be aware of that. I have had more people contacting me saying we should sell rather than keep it.”

IAG, owner of British Airways and Spanish carriers Iberia and Vueling, wants to use Aer Lingus to cash in on Dublin Airport’s growing position as a hub for transatlantic travel.

Mr Walsh said at yesterday’s meeting that, if a deal went through, IAG’s other members companies and partners such as American Airlines would be selling seats on Aer Lingus flights. This would allow Aer Lingus accelerate its growth plans, based on developing Dublin’s position.