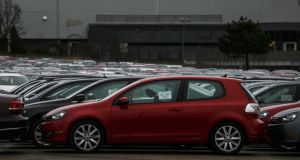 A High Court judge has been asked to decide whether a case by a nurse arising from the Volkswagen Group’s emissions scandal can continue to be heard at Castlebar District Court.

A High Court judge has been asked to decide whether a case by a nurse arising from the Volkswagen Group’s emissions scandal can continue to be heard at Castlebar District Court.

Volkswagen insists it is not seeking to stop Eithne Higgins litigating but that Dublin District Court is the appropriate venue for hers and other cases initiated here against the car firm arising from installation of so-called cheat devices designed to mislead US emissions tests.

If the High Court rules Ms Higgins’s case can continue in Castlebar, the firm says it should not continue to be heard by Judge Mary Devins because, it claims, her handling of the case to date has breached the firm’s right to fair procedures.

Ms Higgins, a nurse, of Boyle, Co Roscommon, claims a 2010 Seat Leon purchased second-hand by her is among the estimated 11 million cars worldwide affected by the emissions problem. She is claiming loss and damage in sums to be ascertained, including for any amounts which may be due in relation to motor tax due to incorrect carbon dioxide emissions figures and for any difficulties in selling her car.

In May 2016, the case came before Judge Devins to address discovery and other issues. The hearing was believed to be the first aimed at having the car giant make public the original expert opinion and technical evidence it used to develop a fix for the affected engines.

In September, Paul Fogarty, for Volkswagen, told the judge, under legal advice, that Stephen McDonnell, head of Volkswagen technical services, would not be in court despite a suggestion by the judge he attend.

Volkswagen’s lawyers walked out of court after Judge Devins said she would proceed to hear the discovery matter. The lawyers indicated they intended to seek a High Court judicial review over jurisdiction.

Judge Devins earlier said she had accepted Ms Higgins’s car, which had been bought in a Co Mayo garage, was purchased from an agent of the carmaker and she had thus accepted jurisdiction.

After the lawyers left, Judge Devins heard evidence, including from expert witnesses for Ms Higgins who said there was a lack of data in Mr McDonnell’s affidavit to support claims the firm had found a way of removing the cheat devices that did not impact on either carbon dioxide emissions or fuel economy.

Volkswagen Group Ireland and Volkswagen AG then went to the High Court, which on September 15th granted leave for judicial review and also stayed the case in Castlebar pending the outcome of that review.

Opening the review on Tuesday before Ms Justice Úna Ní Raifeartaigh, Paul Gardiner SC, for Volkswagen, denied his side was seeking to stop Ms Higgins litigating. She lives in Boyle, which is not in the area of Castlebar District Court and she can sue the firm where it is located, Dublin or Germany, he said.

There was no identified contract for sale for the Seat Leon to ground jurisdiction in the Castlebar court and the relevant contract was between Ms Higgins and a car dealer who had “deliberately” not been joined to the case, he argued.

While Ms Higgins’s side argued Volkswagen was out of time for judicial review because Judge Devins said during the September hearing she had decided the jurisdictional issue on May 27th, no formal ruling concerning jurisdiction was made in May or, if it was, his side was unaware of that before the three-month time for judicial review expired, he said.

If the High Court decides the case can proceed in Castlebar, it should not be heard by Judge Devins because various rulings by her prejudged the jurisdictional issue and breached Volkswagen’s right to fair procedures, he argued. If the Castlebar court was found to have no jurisdiction, the case could be reissued in a court that has jurisdiction, in Dublin, or can be abandoned, he argued.