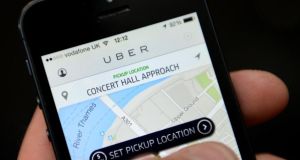 Uber, the online transport company which is to operate a 300-job customer-support centre in Limerick, is not free to operate a peer-to-peer car sharing service without the authorisation of the Department of Transport, Michael Noonan has insisted.

The new service would allow someone registered and approved as a driver with Uber to offer someone a lift in return for a cash payment. The person accepting the lift must also be on Uber. In other parts of Europe the fees paid for such transport are lower than the equivalent taxi fare.

Speaking at the official opening of the company’s new centre of excellence in Limerick for EMEA, Mr Noonan hit back at Fianna’s Fail criticism of Uber, which it claims does not pay VAT on taxi fares in Ireland.

Mr Noonan said Uber was an American company which is registered in the Netherlands for VAT on its European business.

“But of course for their activities in Limerick they will have to be tax compliant in Ireland and profits they make will be subject to the 12.5 per cent tax rate in Ireland,” he said.

Over the weekend Fianna Fail called on Ministers Jan O’Sullivan and Michael Noonan to boycott Monday’s official opening of the Uber call centre on Thomas Street in Limerick city centre and also criticised the firm for paying tax on its Irish earnings overseas.

“If it is a private driver they don’t earn an awful lot from Uber, it’s a bit of extra money, so they will be well below VAT thresholds. On the other hand if it’s somebody in the taxi business there will be a VAT liability and they would be liable to pay the same as anybody else who exceeds the VAT thresholds so there isn’t any issue as far as I can see,” he added.

Speaking at official launch, Uber general manager Kieran Harte said the company looks forward to continuing its conversation with the Government to ensure that Irish citizens “can experience the new opportunities in transportation that the technology like Uber enables”.

“We look forward to rolling out some of the services that have made Uber such a global phenomenon across cities and towns in Ireland and we hope that Limeick can recognise its opportunites to become an innovation hub to some of those new transportation services.”

When asked afterwards about Fianna’s Fail’s criticism of Uber’s VAT status in Ireland, Mr Harte insisted the company is “absolutely compliant with all the tax rules in Ireland and the EU”.

“We have been operating in Ireland for over two years so we were surprised to see that story brought up before what is really an amazing announcement about a €4 million investment in Limerick and the creation of over 300 jobs.”

“It would seem to me that somebody in Fianna Fail was effectively making a counter announcement which intended to damage Uber’s setting up in Limerick.”

When asked about the car sharing transport system Uberpop being possibly rolled out in Ireland, Mr Noonan said it was “premature” to have that conversation.

“A lot of these new industries based on mobile phone apps go under the term of disruptive technology and obviously that impacts on existing industries the same as Air BnB , that’s exactly the same type of technology.

Mr Noonan said he did not know how far conversations had progressed between Uber and the Department of Transport.

“I don’t know how far those conversations have gone but Uber are not free to start some new pilot scheme without the authorisation of the Department of Transport,” he said.