Terminals in two of State’s airports to get facelifts 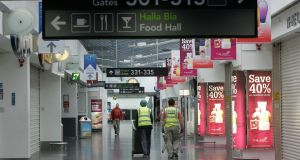 Dublin Airport Authority has hired Glenbeigh Construction to carry out work on the ground floor of its Terminal One building, part of an overall refurbishment that will cost €10 million. Photograph: Alan Betson

Terminals in two of the State’s airports are to get facelifts over the coming weeks.

Dublin Airport Authority has hired Glenbeigh Construction to carry out work on the ground floor of its Terminal One building, part of an overall refurbishment that will cost €10 million.

Meanwhile, Shannon has taken on Clare company M Fitzgibbon Contractors for renovations to the mid-western airport’s terminal building for which the local council recently granted permission.

The work in Dublin will be on the ground floor of the terminal – the arrivals area – and will take in food and drink outlets and public seating. It will also increase the commercial space available.

Shannon is carrying out a floor-to-ceiling refurbishment focused on gates one to five which includes the arrivals hall, transit lounges and the departure gate areas. The work will employ 25 to 30 people.

Dublin airport recently reported it had handled more than 23.5 million passengers in the first 11 months of 2015, effectively breaking its previous record for a single year, with December still to come.

The airport set its previous record of 23.46 million in 2008, just before the Republic headed into a long recession.

Passenger numbers are up 16 per cent so far this year. This month the airport said that 23 new routes combined with extra capacity on existing services to drive the growth.

Meanwhile, passenger numbers at Shannon in November grew by 4 per cent to break the 100,000 mark.

The airport released the figures following news that Aer Lingus Regional plans to reinstate its Shannon-Edinburgh service from March.

According to chief executive Neil Pakey, Shannon is on track for three straight years of growth since it was made independent of Dublin at the beginning of 2013.