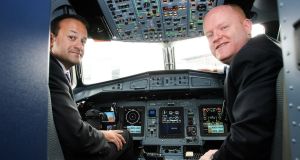 Stobart Air chief executive Seán Brogan is leaving the company following the board’s rejection of his management buyout bid for the carrier, which operates the Aer Lingus Regional franchise.

The move comes in the wake of the sudden departure of the airline’s chairman, Tim Jeans, who was replaced by Andrew Tinkler, chief executive of the company’s biggest shareholder, the listed Stobart Group.

The carrier confirmed yesterday that Mr Brogan and the board have agreed that he will leave the company, which will now begin seeking a replacement.

His departure ends any prospect of management buying out the airline, whose other large shareholder, Invesco, signalled last year that it wanted to sell its 40 per cent stake in the firm.

Mr Brogan was understood to have secured backing for a management bid for the airline and brought this proposal to the company’s board after it became known that Invesco wanted to sell.

Part of Stobart’s original motivation for leading the rescue of the airline then known as Aer Arann and buying its 45 per cent stake in 2010, was that it believed it could use the carrier to serve London’s Southend Airport, which it owns.

However, while the airline has grown on the back of its relationship with Aer Lingus, it did not deliver significantly to Southend. Despite this, sources say that Stobart still wants to explore how the airline could be used to develop the airport.

The airline was profitable in 2015 and is poised to carry more than 100,000 passengers this year for the first time. Most of its growth stems from its partnership with Aer Lingus, for which it operates a regional service from Irish, British and some French airports.

These routes mean that it plays an important role in Aer Lingus’s plans to grow its transatlantic business by feeding British and European passengers onto its long-haul flights at Dublin Airport.

Willie Walsh, chief executive of Aer Lingus’s parent, International Consolidated Airlines’ Group (IAG) confirmed recently that it was watching developments at Stobart Air, although he stressed that the ownership issue was a matter for the airline itself.

One option that has been suggested is that it could tie in with commuter and short-haul specialist, Cityjet. However, this could cause competitive difficulties with Aer Lingus.

Stobart Air said yesterday that Mr Brogan would remain as chief executive on an interim basis to ensure a smooth transition to his successor and to satisfy requirements laid down by the Irish Aviation Authority.

In a statement, Mr Brogan thanked the board, shareholders and colleagues for their support.

“With strong shareholder backing, we have grown the airline from examinership to profitability, building its team, network, routes and passengers year-on-year,” he said. “Now is the right time for me to step away to pursue new challenges.”

Mr Tinkler said that the departing chief executive had played an integral part in driving the airline’s transformation and establishing it as a force in aviation. “We thank Seán for his contribution, and wish him continued success into the future,” he said.