Some 80,000 fly between Dublin and Hong Kong 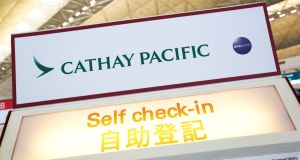 About two out of every three passengers from the Republic are travelling onwards from Hong Kong to destinations in Australasia and the Far East. Photograph: Bobby Yip/Reuters

About 80,000 people flew between Dublin and Hong Kong on the service that Cathay Pacific launched between the two cities a year ago, according to Edward Fotheringham, the carrier’s regional head of marketing and sales Europe.

Mr Fotheringham said this week that the route had performed “very encouragingly” since.

“We’ve had about 80,000 passengers on the route, which is encouraging, about two million kilos of Irish goods being sent out to the Far East, mainly things like seafood and pharma goods.”

A large number of hi-tech industries at either end of the route contributes to passenger numbers. The greater bay area, including Hong Kong, Macau and Shenzhen, with a population of 70 million, is a key centre for IT in the Far East.

About two out of every three passengers from the Republic are travelling onwards from Hong Kong to destinations in Australasia and the Far East that Cathay Pacific serves from the hub.

Mr Fotheringham noted that Australia and Japan, which will host the Rugby World Cup in the autumn, are currently prime destinations for Irish travellers.

Forward bookings are growing significantly, Mr Fotheringham observed. He believes this stems from sustainable commercial traffic between the two regions rather than simply a lift resulting from the rugby competition.

He said the airline offered very competitive fares to Hong Kong and the onward destinations. Cathay this week appointed a new account manager, Fiona Noonan, to target the corporate market here. “It is our plan to make a real commercial success out of it,” Mr Fotheringham said.