Deal underscores value of Aer Lingus rights at the airport 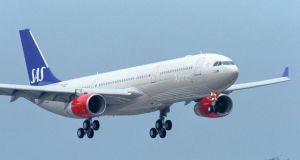 Scandinavian airline SAS has sold further rights at Heathrow Airport in a deal that will net it $22 million and which follows an earlier sale for $60 million.

The two transactions underscore the value the landing and take-off slots at the hub owned by Aer Lingus and which are a flashpoint in the debate over whether it should be sold to rival International Consolidated Airlines’ Group (IAG).

SAS said on Friday that it is selling one slot pair to Turkish airlines that will net $22 million for the Scandinavian carrier during the second quarter of the year.

The slots are for the winter season, which begins on October 25th, are for afternoon flights.

Earlier this month, SAS sold a summer-schedule slot pair to an unknown buyer, possibly a US or middle eastern carrier, for $60 million.

That deal implied a value of more than €1 billion on Aer Lingus’s 23 pairs at Heathrow. However, the value of individual slot pairs varies considerably.

IAG’s chief executive, Willie Walsh, has told the Government and Orieachtas that the group is prepared to guarrantee that Aer Lingus’s slots will only be used to service Irish routes for five years after any take over.

The Government wants this to be extended before agreeing to sell the State’s 25.1 per cent stake in the airline, although Mr Walsh has said that he would be “crazy” to offer any longer.