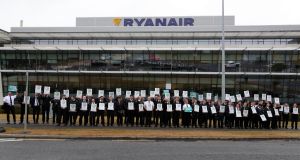 Pilots on the picket line outside Ryanair HQ in Swords on Friday morning for the second day of strike action. Photograph: Colin Keegan/Collins

In terms of sheer numbers, it looks like Ryanair’s cabin crew strikes could have more impact than the actions of its pilots who went on strike again in Dublin on Friday. Tuesday’s stoppage by members of the Irish Airline Pilots’ Association will ground 16 flights out of 290, affecting 2,500 passengers.

Over Wednesday July 25th and Thursday July 26th, cabin crew in Belgium, Portugal and Spain will strike. According to Ryanair, this will disrupt up to 50,000 passengers on each of the two days. The airline will cancel 300 of 2,400 daily flights on Wednesday and Thursday. Ryanair said this week that it has begun contacting affected customers to offer them alternative flights or refunds.

So it looks like cabin crew stoppages will have a deeper impact than the pilot strikes within the countries affected. However, so far, none of the actions has really hit the airline hard. Already this year it has managed its way through cabin crew and pilot strikes avoiding full-scale disruption. It looks set to do so again next week.

Ryanair does face the risk of escalation. The Irish dispute showed no signs of ending on Friday. German pilots are balloting this month, so they could potentially take action in August. That union, VC, could be a difficult adversary as Germany’s industrial relations regime is more relaxed than the Republic’s.

At the same time, the airline says it is making progress with unions in other countries. This week, it has done deals with organisations representing cabin crew in Germany and Italy, so it is spreading a little industrial relations peace as well.

Ryanair and the unions know that disputes end. This generally takes one side or the other to blink, or for a third party to broker peace. At this point, though, none of those eventualities seems close.