Lufthansa like 'drunken uncle at a wedding', says O'Leary 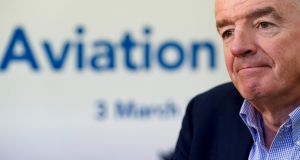 The Irish carrier is opposing Lufthansa subsidiary, Austrian Airlines’ bid for €767 million in state grants and loans, while it has challenged French and Swedish tax breaks for airlines registered in those countries.

Mr O’Leary argued on Thursday that he believed Lufthansa’s bid for aid from various EU governments for the German group and its subsidiaries would distort competition.

“Lufthansa is going around hoovering up state aid like the drunken uncle at the end of a wedding, drinking from all the empty glasses. They can’t help themselves,” Mr O’Leary said in an interview with news agency Bloomberg.

“We don’t want state aid, but we’re now being asked to compete with not one hand, but two hands tied behind our back.”

Ryanair told The Irish Times this week that it favoured transparent schemes such as the Government’s wage support programme, as these were available to all carriers.

However, the Irish group is challenging supports such as the French and Swedish tax rebates, as they are available only to airlines registered in those countries, and are thus illegal state aid.

Air France-KLM, a combination of the former French and Dutch flag carriers, would benefit largely from France’s deal to allow airlines registered there to delay tax payments for two years.

The European Commission has indicated that it would bend normal state aid rules in the current crisis, which has left airlines with virtually no revenues.