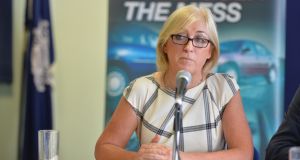 The Road Safety Authority is calling for a 30km/h speed limit in the Republic’s towns and cities and around schools.

As well as protecting pedestrians and children, such a move would also boost tourism, it claims.

The authority says there is incontrovertible evidence that lower speed limits in towns and cities dramatically reduce road deaths.

“If you are hit by a vehicle travelling at 30km per hour, you have a nine in 10 chance of surviving,” said chief executive Moyagh Murdock.

The general speed limit in built-up areas is 50km/h, but local authorities can reduce it further in areas they deem appropriate.

Ms Murdock said: “30 km/h should be the default position, and if you want this increased, you should have to ask for it.”

She said lower speed limits had worked in many other towns and cities. In Edinburgh, for example, 80 per cent of the streets are zoned 30km/h, or 20 miles per hour.

The authority’s chief said the benefits were manifold: many parents are reluctant to let their children play outdoors or take bikes out, because of the increased traffic and the sense that it is not safe, “whereas if speed limits in urban areas were reduced, this would help allay this fear”.

She argued that tourism could also benefit as people would be more inclined to come on cycling and walking tours.

Ms Murdock said Ireland had been slower to move towards reducing limits. “There is a fear of negative reaction [and] we have been very slow to get out of the car.”

This is in terms of loss of earnings, cost to the family and community of the bereaved person, medical costs, Garda and emergency services, inquests and other costs.