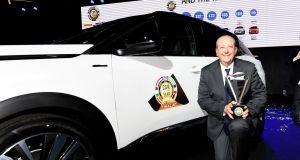 Peugeot 3008: Chief executive Jean-Philippe Imparato with trophy next to the 2017 European car of the year. Photograph: Alain Grosclaude/AFP/Getty Images

The Peugeot 3008 is Europe’s car of the year for 2017, becoming the first SUV to pick up the coveted prize. After seeing off a a close challenge from the new Alfa Romeo Giulia, the French brand topped off news that its parent has bought Opel with this award.

The 3008 was developed during tumultuous times of the financial crisis, when the very future of Peugeot parent firm PSA was called into question by some financial analysts. According to Peugeot brand chief executive Jean Philippe Imparato: “From hell to heaven, this means to much to us, to every man and woman in the firm.”

The final scores for each of the seven finalists were: Peugeot 3008, 319 votes;

Each of the 58 jury members from 22 countries award 25 points between the final group of cars, with a maximum of 10 points for any car.

The seven finalists underwent a series of test events by the international jury members, culminating in the recent two-day test event at the Ceram test facility in Mortefontaine, France. Unlike many other awards, the votes of each jury member are published along with a brief explanation on the decision on each finalist.

As the Irish jury member, my points and explanations are as follows.

Cynics suggest this just a redressed Renault Clio, but the new Micra represents more than the sum of its parts. The last model was conceived as a “world car”, designed to appeal to all markets and therefore, predictably, delighted none. This, then, is the first Micra in years that you could consider buying. It drives noticeably better than the Citroen C3, although the little petrol engine spends a lot of its time at full screech. Scores for design and because it’s monumentally better than the last generation. But that’s not enough to win car of the year.

The Italian saloon harks back to the brand’s enormous heritage and aims to bring it up to date. The best driving car on the track, its handling is crisp and reassuring, the peppy 2.2-litre diesel is eager enough to challenge any similar-sized petrol counterpart, and the more you drive it, the more you want to drive it. Yet it still seems well behind the fit and finish of rivals, while the tech comes across as already relatively clunky. With its future still in question and revolution in the air across the automotive world, Alfa needs to focus a lot more on the future and stop harking back to the past.

The Citroen doesn’t drive as well as the Nissan Micra or many of its rivals already on the market. Yet it has more charm and character in its dashboard than the rest of the cars in this segment put together. The French firm claims that it is engineered for comfort, which on the road means it bounces along and leans into corners. The smaller petrol engine is the better one to drive, while some tech features, such as the optional built-in camera, are a bit of a gimmick. Yet for a car that will spend most of its time in town traffic, it has some of the character we normally associate with heritage cars such as the Mini and Fiat 500. Far from flawless, but it has great charm.

The C-HR supposedly represents the future of Toyota. The message is “no more boring cars”. If this proves to be the case, then this truly is a landmark car. The styling divides opinion (I like it) and the cabin and finish is worthy of the premium Lexus brand. The new TNGA platform handles really well. Where it is let down is in the powertrains. The engineers claim this car was built for dynamic European driving tastes, but the hybrid powertrain is ill-suited to such styles. It spends too much time in high revs and the CVT auto transmission doesn’t help matters. The 1.2-litre petrol is by far the better version to drive, but this crossover cries out for a more powerful engine.

A tough call on the Volvo, for it is within a hair’s breadth of taking the lead on the Mercedes. You have to admire the amazing leadership at the Swedish brand. This car firm truly operates like a start-up, taking on rivals with much deeper wallets. The S90 scores for innovation, styling and individuality, something premium car buyers badly need. If your primary interest is in comfort and refinement with some fancy tech, then the Volvo delivers. Still, the handling is simply not as sharp as the Mercedes, nor are the smaller diesel engines as refined. Close, though.

A revolutionary offering by a French brand that teetered on the brink of financial ruin around the same time engineers were developing this car. There must have been times when they thought it would never make the road, so what a comeback. It might look like just another SUV/crossover, but inside it’s a revolution. Peugeot has pulled out all the stops in the cabin and is the most sophisticated offering from the brand I can remember. It also drives really well, particularly with the 1.6-litre diesel with automatic transmission. The petrol delivers as well. A car that easily copes with cross-country motorway runs or short school hops, this is the best family car Peugeot has offered in many years. More of this please.

Of course, the Mercedes E-Class is good. It would need to be, given the billions invested in its development. Reportedly €2 billion was spent on a new range of 2.0-litre diesel engines for the E-Class, which will eventually trickle through to the rest of its model range. It is indicative of the level of thought, care and attention that has gone in to creating the new E-Class, a car that has to take on the might of BMW and Audi, and see off challengers from Jaguar, Lexus and Volvo too.