Q&A: What’s going on with the Luas now?

All you need to know about unrest, refunds and invoking rebel leaders 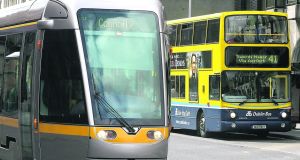 People planning to take public transport into Dublin city centre this weekend will have to use the bus rather than the Luas as the dispute at the light rail company over pay continues. Photograph: Cyril Byrne/The Irish Times.

There’s a Luas strike this weekend? I thought this had all been resolved before St Patrick’s Day?

A lot of people did but that was before proposals drawn up at the Workplace Relations Commission aimed at bring the dispute to an end were overwhelmingly rejected. Some 99 per cent of Luas drivers rejected the new deal with 100 per cent of those in its revenue protection grades saying no.

What exactly have they rejected?

Pay increases of either 10 per cent or more than 18 per cent depending on who you believe. Transdev, the company which runs the Luas, said the proposal would have provided substantial pay increases and were at the outer limits of what it could afford. “For example a driver on €42,247 would have seen an increase to €50,000 by January 2019 plus a bonus of €3,250,” they said.

But is it 18 per cent? Siptu says otherwise. The union says the increases amount to 10 per cent between now and 2019. “The proposal itself is regressive. The new entry rate for recruits is lower than the current lowest rate of pay,” said Siptu’s president Jack O’Connor.

If they can’t even agree on what the offer on the table is, there must be a real problem.

There is. Siptu organiser Owen Reidy has warned that Luas customers are facing protracted industrial action over the coming months. He said there had been a “fundamental breakdown” in the talks and the relationship between the sides is now “fraught”.

So what happens next?

Siptu had already served notice of strike action on Easter Sunday and Easter Monday, as well as on four other days in April.

Well that’s a disaster given the weekend that it’s it?

Sure is. The city is largely a no go area for private cars until Tuesday and part of the transport plan would have seen tens of thousands of people brought in and out of the city on trams. Not any more though...

What is the Government doing?

Not a lot, really. Minister for Transport Paschal Donohue said he would not put the cost of the dispute on the taxpayer. He said he was not going to “take out the chequebook of the taxpayer” to resolve the row as it would “create massive costs for the taxpayer in the future and undermine our ability” to resolve other industrial disputes. He has called on union leaders to invtervene.

And what did they do?

They invoked the spirit of James Connolly, obviously. Jack O’Connor said he had a responsibility not to abandon union members. He suggested it was “ironic” the row was happening at this time. “James Connolly fought for the right to engage in collective bargaining and to withdraw labour. It is not open to me to betray people in the heat of battle.”

I have a Luas ticket. Can I use it on the buses?

No. As with the earlier strikes, Luas tickets are not valid on other forms of transport and there will be no alternative transport service provided to Luas passengers. Luas passengers are kind of on their own.

But I just bought my self a seven day pass and there will be a strike for two of them. That is not fair?