Norwegian Air to fly Cork to Boston from early 2016 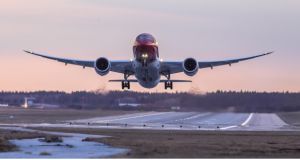 Service to operate three times a week from next April.

Norwegian Air International is planning to launch a number of services from Cork Airport, beginning with flights to Boston early next year.

The airline, an Irish-registered and licensed subsidiary of Norwegian Air Shuttle, is establishing a low-cost long-haul business in the Republic that will offer flights between Europe and the US and Far East with fares from €315 return.

It is understood that it intends to begin flying from Cork to Boston three times a week from next April and has recently told the Department of Transport, Tourism and Sport of its intentions.

The Scandinavian-based group is likely to follow that with services from Cork to New York and Barcelona, although those are more likely to be launched late next year and in 2017.

Norwegian’s plans to use its Irish-licensed subsidiary to fly transatlantic routes from other European cities, allowed under EU agreements with Washington, have met opposition in the US, much of it driven by aviation unions.

However, it is thought that services from the Republic are unlikely to run into the same difficulties. The objections raised last year were rooted in the fact that an Irish-registered airline planned to fly from airports outside the State to the US.

A Norwegian Air Shuttle group spokesman said that it has ambitious growth plans for Ireland and Britain, but added that it does not engage in speculation about new routes.

Cork airport said that it does not comment on “speculation or on discussions that it may or may not be having with specific airline partners”. The department also refused to comment.

1 If tourists are such pariahs should we not be testing them on arrival?
2 Belgium helps Ireland to a Brexit boon
3 ‘My rent here is so low it’s a joke’
4 WeWork on track for profits in 2021, says chairman
5 Varadkar to meet banks in row over interest on mortgage payment breaks
6 Can Grafton Street stop the flood of closures?
7 Banks will be judged less on payment breaks and more on next step
8 FC Barcelona to pursue Nike for compensation over defective shirts
9 ‘Sad day’ for House of Ireland as tourism retailer goes out of business
10 Mortgages: How to get around the Central Bank’s borrowing rules
Real news has value SUBSCRIBE