‘No reason’ to refuse Norwegian Air Shuttle a transatlantic licence 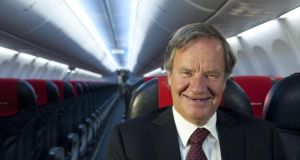 Norwegian Air Shuttle chief executive Bjorn Kjos says there is “no reason” for US authorities to refuse the airline’s Irish subsidiary a licence to fly there.

Earlier this month, the US department of transport refused a request from Dublin- based Norwegian Air International for a short-term permit that would allow it to fly between Europe and a number of north American cities.

Mr Kjos said yesterday that Norwegian Air International was fulfilling all the requirements of the open skies agreement between the EU and US. “Therefore there is no reason to refuse us a licence,” he said.

The decision has dealt a blow to the Scandinavian group’s plans to launch a low- cost transatlantic service.

Mr Kjos was in Dublin to address an aviation industry investor conference organised by Goodbody Stockbrokers.

The Scandinavian carrier plans to operate low-cost long- haul services connecting Europe with the US and Far East using Irish-registered subsidiary Norwegian Air International as its licences are covered by EU-US agreements .