Investment is a partnership between Fáilte Ireland, the parks and wildlife services 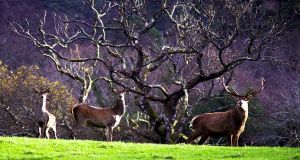 Killarney National Park: The initial funding will focus on the five national parks and five nature reserves as well as the Wild Atlantic Way and Wicklow National Park

Ireland’s national parks will be boosted by a €500,000 investment under a partnership between tourism body Fáilte Ireland and the National Parks and Wildlife Services (NPWS).

The aim of the cash injection is to grow tourism revenues in the rural areas where the parks are located and widen Ireland’s appeal as a holiday destination. Fáilte Ireland will be investing the capital funding of €500,000 to kick-start the initiative.

The initial funding, announced in Ballycroy National Park in Co Mayo by Taoiseach Enda Kenny, will focus on the five national parks and five nature reserves as well as the Wild Atlantic Way and Wicklow National Park, with a view to undertaking feasibility studies on new tourism projects at these sites.

“This new strategic partnership between Fáilte Ireland and the National Parks and Wildlife Service is an excellent example of state agencies proactively working together to advance a shared objective to the benefit of local communities,” the Taoiseach said.

Minister for State for Regional Economic Development Michael Ring said the last few years had been “difficult” in relation to exchequer funding, but the Government was now in a position to invest further in Ireland’s natural heritage.

“It is my intention to continue to invest in our national parks and nature reserves to ensure they remain a vital tourist resource which underpin the economy,” he said.

The investment follows a €550,000 partnership with Coillte to develop the tourism potential of State-owned forestry sites.