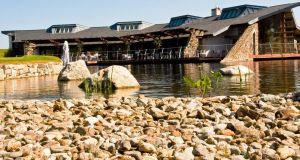 Glen of the Downs golf club: A statement of affairs prepared by directors, who include landowner Michael Doyle, shows total assets of €581,000 and debts of €2.9 million

Glen of the Downs golf club, with a membership comprising many senior business figures, appears set for sale after AIB appointed receivers who will co-ordinate with receivers for Goldman Sachs to bring the entire complex to market.

Creditors of the insolvent operating company of the golf club held a meeting in a Dublin hotel on Friday to confirm the appointment of Galway accountant Conor O’Boyle as liquidator in a voluntary wind-up.

A representative of Grant Thornton accountants, however, turned up at the hotel to say Michael McAteer and Nicholas O’Dwyer of the Dublin firm were appointed receivers by AIB on foot of loans of about €1.8 million.

Stephen Tennant, also of Grant Thornton, was separately appointed receiver last year to the 107 acres of parkland on which the club has a 99-year lease, on foot of loans held by a Goldman distressed assets fund.

It is understood the two sets of receivers will pool resources to quickly sell the land and club together as one lot. Receivers generally take precedence over liquidations, and talks are ongoing between Grant Thornton and Mr O’Boyle.

Mr Doyle told the meeting some growth had returned in 2015. The club remains closed, however, and the receivers are unlikely to reopen it prior to a sale. While the Goldman receivers control the land, the AIB receiver has taken over the lease and, ultimately, the clubhouse located on the course, considered one of the finest in greater Dublin.

A members-only meeting took place in the local Glenview hotel on Thursday night to discuss “the offerings” of other golf clubs, according to emails obtained by The Irish Times.

A further members’ meeting is scheduled for Tuesday at the conference centre of the nearby Druid’s Glen complex, to discuss “playing golf at Druids Heath and for them to present their offering”.

Druid’s Heath is one of two championship courses at the venue, with annual fees of €1,350.

Druid’s Glen Resort chief executive Edward Stephenson said Druid’s Heath had offered the members of Glen of the Downs “the courtesy of the course to ensure continuity of play” and meeting space to facilitate “ongoing discussions”.

“A meeting will take place on Tuesday and attractive options will be presented to the membership,” he said.

Fiachra O’Donnell, captain of the Glen of the Downs club, did not return calls seeking comment.