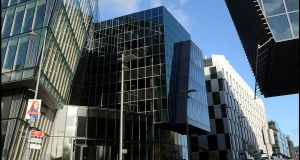 Both high-profile dockland sites are owned by companies controlled by Mr Crosbie.

A Nama spokesman declined to comment on the matter.

The fate of the Mr Crosbie’s other flagship property, the O2, is unclear at this stage.

Formerly the Point Depot, the concert centre was not among the assets over which receivers have been appointed.

Mr Crosbie is a 50 per cent shareholder in the O2, with the US concert business, Live Nation, owning the rest of the shares.

It is not known whether Nama’s move will extend to other assets of Mr Crosbie in time, as has been the case with other major developers.

When contacted earlier today, Mr Crosbie said he would not be commenting on the matter.

Nama acquired this debt when it took over loans that his companies had drawn down from AIB.

A mortgage with AIB taken out in 2008 includes a charge over “all property and assets both present and future of Harry Crosbie.”

The Crosbie Group is also party to another €250 million due to the agency for developments involving other individuals and companies.

In addition, he has resigned as director of several companies associated with the Point Village, which consists of a number of developments around the O2, including the Gibson Hotel.

Speaking to RTE in 2011, Mr Crosbie said Nama had been “very helpful” in assisting him complete the Grand Canal Theatre development by affording working capital to complete the project.

He said the agency had also funded the completion of the Point Village.

Mr Crosbie suggested that the State agency would be repaid only the actual amounts that it paid for the loans and not their full value.